The deep-sea seapen Umbellula: cheek to cheek in the deep sea

Cruise diary: One of the most spectacular creatures that we occasionally encounter down in the deep, cold ocean is the deep-sea seapen Umbellula encrinus. This spectacular organism, resembling a giant plant or exploding fireworks is in actual fact a colony of giant polyps, which are collected in a crown perched atop a stem, of sorts. 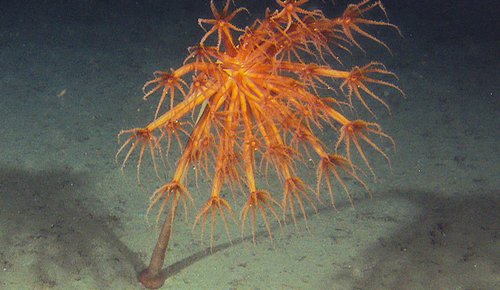 Rising above the seabed up to 2 meters, it is among the biggest sessile species found in the deep sea. The specimens we observed in one of our latest under-water video surveys were slightly smaller than that, though, up to about 1.5 m tall. 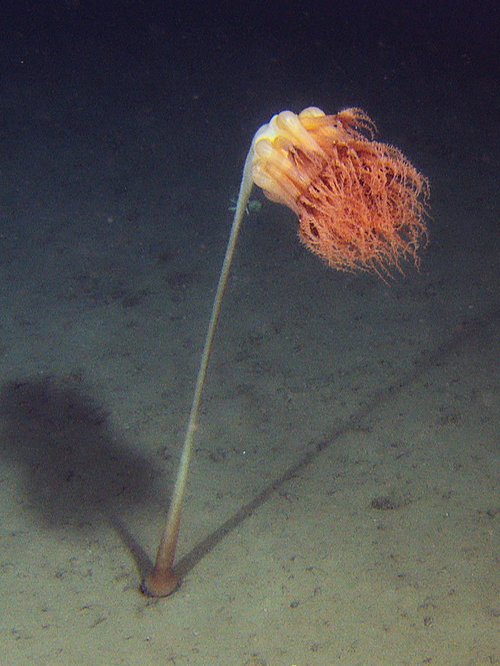 Although this deep-sea seapen can be 2 metres tall, the specimens we observed on this cruise is up to about 1.5 m tall.

We have spotted this organism on several occasions during previous Mareano surveys outside Lofoten and Troms, but seldom forming such dense populations as the one we observed in the depths north of Skjoldryggen. Here, the Umbellula population spanned the whole of our 700 m long video transect and for that reason we can’t know how far this community stretches over the seabed. In addition, local densities were observed of up to 5 colonies per 100 square meters. This may not sound like very dense at all, but the larger organisms require more space around them that the smaller ones!

A striking feature of this population of Umbellula was that colonies often occurred in pairs, not more than 20 cm apart. The reason for this is unknown, but we may speculate whether it concerns the sex of the colonies, where male and female colonies would favor staying closely together to increase the chance of fertilization. 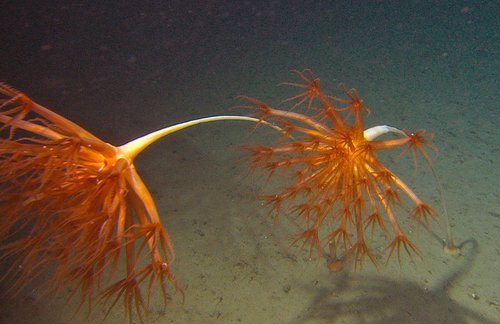 In this population of Umbellula, the colonies often occurred in pairs, not more than 20 cm apart.

The substrate where the seapens live consists of sandy mud, and these seapens are “anchored” with a kind of "foot" that reaches down to about 15 cm into the sediment. In this environment Greenland halibut and eelpouts also thrive. The Greenland halibut is the targeted species for the deepest fishery in Norway, commonly caught with trawl below 500 m depth.

The dense and ubiquitous presence of this organism gives the area a definitely different character, to the point that it can be considered its own habitat type: Umbellula stands. Umbellula stands and similar habitat types featuring other kinds of seapens are known to be sensitive to damage from demersal trawling, for example, from the Greenland halibut fishery. How big this threat is, we do not know, and neither do we know what ecological function these organisms have. However, OSPAR (Oslo / Paris Convention), an organization responsible for the conservation and management of marine ecosystems at European scale, has already flagged as “vulnerable” some of those other, similar habitat types occurring in shallower waters.

The knowledge gathered by Mareano in this survey will be invaluable in continuing work towards understanding the importance and fragility of this habitat at Norwegian, and also global scales.