Several of the TOPAS lines acquired during the first week of MAREANO’s autumn survey crossed a long zone of fault-like cracks directly west of the shelf edge. Another profile line was run along the crack system, and small changes of the ships heading secured several intersections of the cracks. The crack zone starts c. 10 km north of the Storegga Slide at a water depth of c. 500 m, and continues c. 50 km towards the north (Fig. 1). In addition to the main zone, several shorter and less evident cracks occur in the area (Fig. 1). 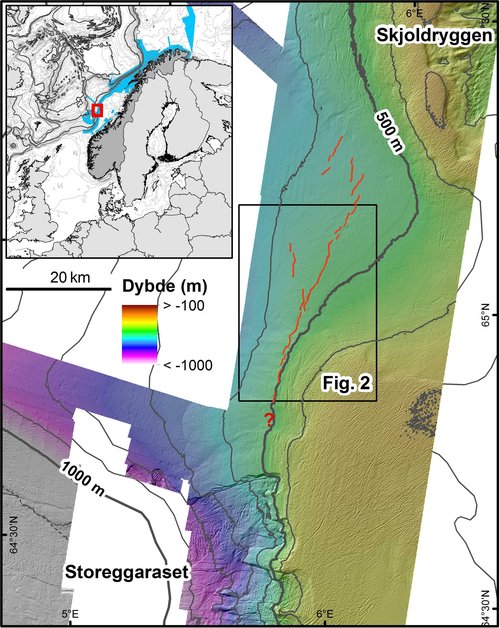 Fig. 1. The crack zone along the upper continental slope north of the Storegga Slide is approximately 50 km long (red lines). Some shorter and less evident cracks are also shown.

Small craters (pockmarks) occur on both side of the crack zone, with the highest frequency in the central part and west of the zone (Fig. 2). However, pockmarks don’t occur near the southern part of the crack zone. The crater-like features are commonly interpreted as the result of gas escape, causing seafloor erosion. In this area, pockmarks are thought to be a result of dissociation of gas hydrates (methane trapped in ice under the seafloor) after the last ice age (Mienert et al., Int. J. Earth Sci. 2010).

The crack zone along the upper slope comprises a nearly continuous system of faults, displaying a series of en echelon cracks as well as parallel crack segments. Some short crack segments deviate from the main directional trend of the zone (Fig. 2). In the northern part, the cracks are more discontinuous, and segments may be laterally displaced several kilometres. At the seafloor, cracks appear as very long depressions, often bounded by normal faults on each side. The features are commonly 100-150 m wide and 3-6 m deep, but may reach 200 m width and 8 m depth. 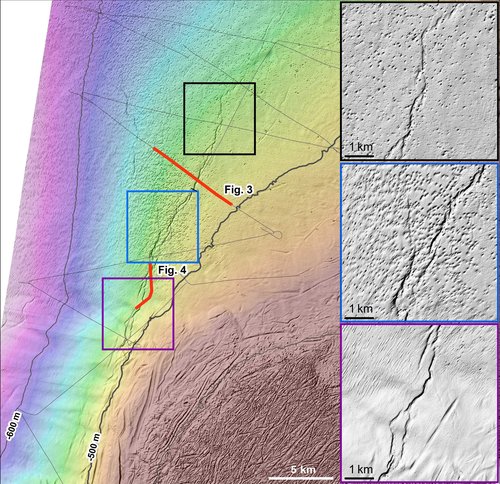 In the paper by Mienert et al. (2010), the authors infer that the crack zone continues to the northern end of the Storegga Slide (Fig. 1). If this is correct, the zone may be looked upon as a continuation of the megaslide’s backwall. Independent of the exact termination of the fault zone, we find the understanding of the cracks (timing and formation) most important for the evaluation of area’s present stability.

Fig. 3. TOPAS line crossing the fault zone at a large angle. The fault seems to disappear about 50 m below the seafloor. Layers below this level continue undisturbed. See Fig. 2 for location.

TOPAS lines were run in nearly flat sea, and the records of very high quality give detailed information unknown from earlier studies. The ‘cracks’ or long depressions are bounded by faults, but these disappear c. 50 m below the seafloor (Figs. 3 and 4). We have no data indicating that the faults are related to deep-seated faults or structures. Most likely the approximately 50 m thick upper sediment package has been displaced along a weak sediment layer towards west before it stopped. The movement was about 100-200 m, and the extension caused one or several nearly vertical fractures. Sediment layers were down faulted and sometimes rotated (Fig. 4), thus forming the narrow seafloor depressions. Layers deeper than c. 50 m below the seafloor are undisturbed, although shallow gas may locally blank out acoustic information (Fig. 4)

Professor Haflidason at the University of Bergen has collected core samples in the down faulted crack zone. Sediments interpreted to represent the formation of the fault zone were dated to 8180 years before present, which is very close to the age of the Storegga Slide. It is therefore likely that the cracks were formed at the same time as a big earth quake released the huge slide. However, the extension of the crack zone stopped before the movement developed to become a slide. According to earlier studies by geologists at the universities in Bergen and Tromsø, it is unlikely that later activity along the crack zone has occurred (Mienert et al., 2010). From the detailed bathymetry and the newly acquired TOPAS data, we have not observed features indicating instability.