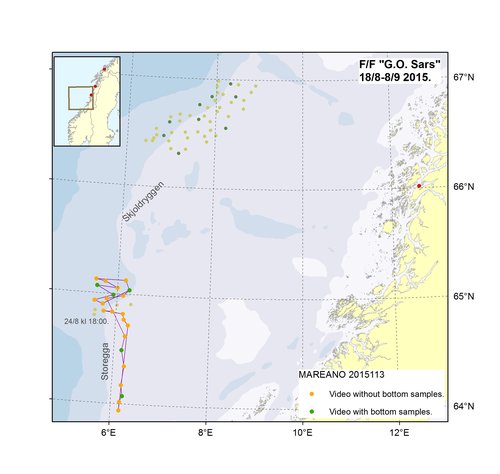 The area on the shelf is characterized by sand and mud in different mixtures, with small areas of stone and gravel accumulations. The seabed is relatively flat, except from ploughmarks after icebergs (made when the ice retreated around 15 000 years ago). ”Pockmarks” (marks after seepage of gas or pore water from further down in the sea bottom) and coral reefs are local structures that also can be seen on the multibeam maps. 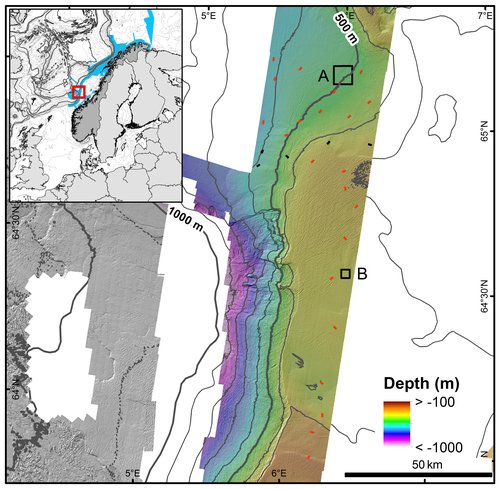 The bottom topography in the southern mapping area and locations for detail maps showing areas with pockmarks (A) and iceberg ploughmarks as well as coral reefs (B).

Shaded relief of bottom topography from two areas showing pockmarks (A) and iceberg ploughmarks as well as coral reefs (B).

We investigated both coral reefs and pockmarks with the video rig Chimaera at depths around 350 m. At one location we were lucky and landed right in a pockmark with thick carbonate crust. Here we also observed dense stands with siboglinid polychaets, a group of animals where several species are known to have symbiosis with bacteria feeding on methane and other chemical components leaking from the seabed. 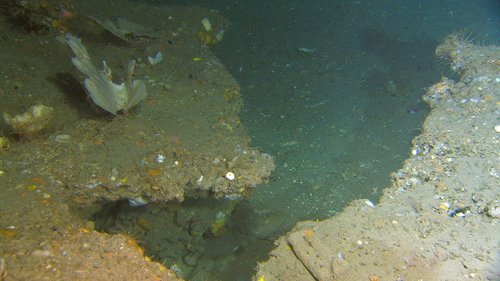 Pictures from a pockmark with thick carbonate crust. 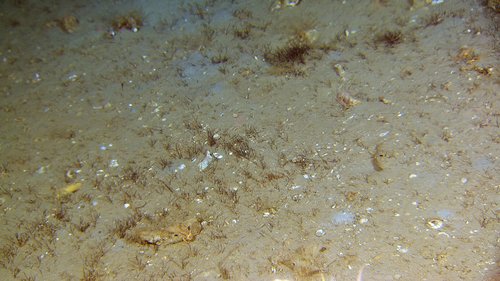 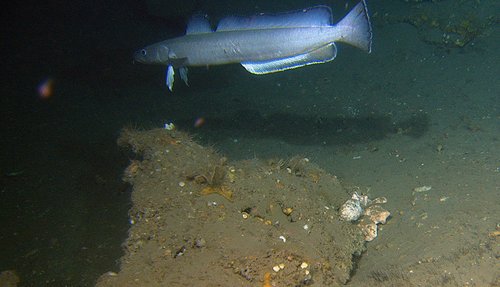 This ling is approximately 70 cm long. Both brosme and ling seem to thive between the carbonate crust sheets.

More than five new coral reefs have been detected during the cruise so far. These are elatively small (< 50 m in diameter) but seem to be in relatively good shape, not impacted by bottom trawling or other human impacts, such as those related to the petroleum industry. 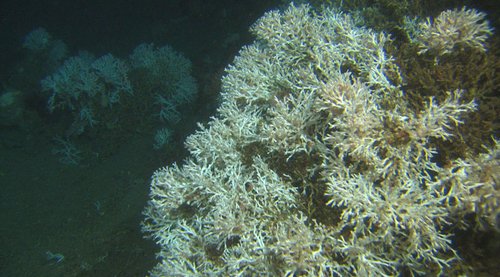 The coral reefs at the shelf seem to be relatively intact with most of the common megafauna present (Madrepora, Paragorgia, Primnoa, Acesta, Sebastes and many more). In the pictures we see the ivory-white Lophelia-coral. 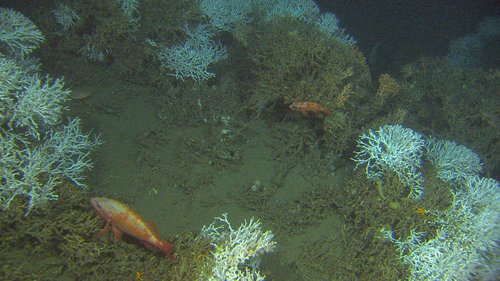 Lophelia-coral and Sebastes. The red variety of Lophelia is hardly visible inni the lower picture together with brown dead skeletons of Lophelia. 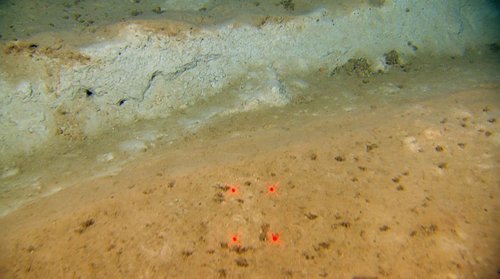 Traces after bottom trawling have been observed, but far from as extensive and dense as previously observed further north, e.g. at Tromsøflaket. The trawlmark in the picture is probably made some time ago as organisms have had time to dig holes in the sides and detritus (downfall of dead phyto plankton) has aggregated in the bottom of the track. 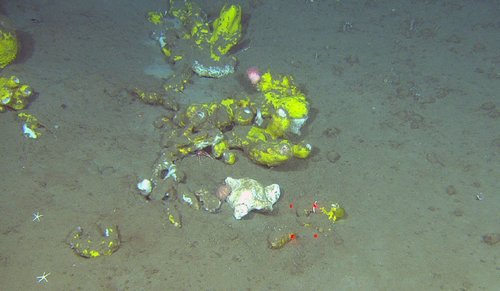 Sponge aggregations on soft bottom have been observed at four locations. These are the same as those occurring in higher densities at Tromsøflaket and Eggakanten and are made of a number of sponge species (Geodia barretti, G. macandrewi, Stryphnus ponderosus, Aplysilla sulphurea and Stelletta grubei).