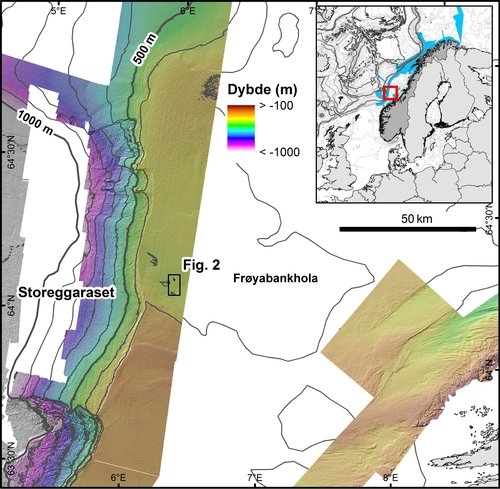 Figure 1 showing the head of the Storegga slide. The black square corresponds to the location of the figure 2.

Mapping of carbonate crusts is of great importance because they indicate leakage of hydrocarbon gases (often methane) to the seafloor. They could be relict or active features, and studies of sampled carbonate crusts contribute to a better understanding of the subsurface petroleum system.

Carbonate crusts are hard blocks of precipitated carbonate and carbonate cemented sediments. They are commonly easy to distinguish from glacially transported cobbles and boulders, as they have a more angular or tabular shape and a less smooth surface texture. They are also very often colonized by animals like corals and sponges (Figures 3, 4 and 5).

In the study area numerous craterlike circular depressions are common (Figure 2). Pockmarks have most likely been formed during leakages of gas or other pore fluids. They mostly occur in soft bottom sediments (sandy mud in this area), which commonly show a low backscatter (Figure 2B). However, in parts of the pockmarked area a higher backscatter occurs, and these areas shows a very good correlation with the presence of the carbonate crusts (compare figures 2B and 2C). In the pockmarked area we also found rubble from coral reefs. It is obvious that the coral reefs used this hard carbonate substrate to settle. 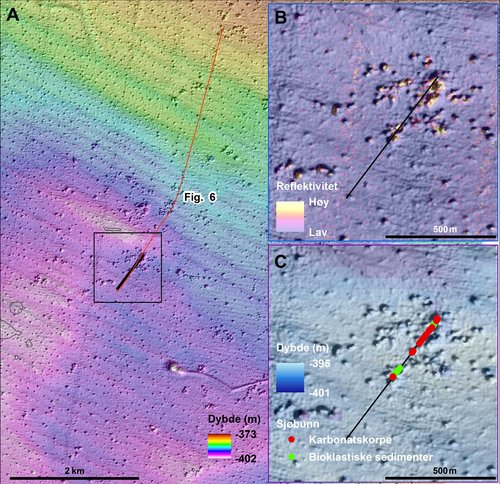 Figure 2. A) showing the video line (black line) where several spots of carbonate crust have been found. B) Backscatter displaying low values in the pockmarked area except into some larger pockmarks where the values are much higher. C) Bathymetry data where the carbonate crust occurrences have been plotted (red dots), the green dots corresponding to bioclastic sediments (mainly coral rubbles).

Our observations of bacterial mats (white spots on figures 3 and 4) indicate some recent activity of the gas leakage. This is confirmed by the presence of siboglinid polychaets (figure 6). This is a group of animals where several species are known to have symbiosis with bacteria feeding on methane or other chemical components leaking from the seabed. MAREANO has previously observed the same organisms in a small canyon close to the shelf edge in Nordland VI. 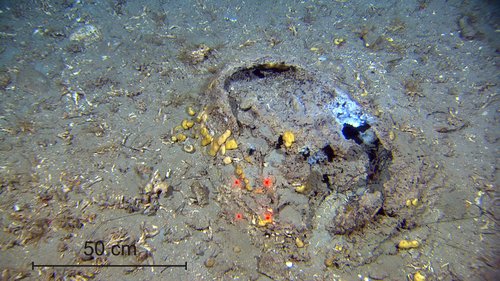 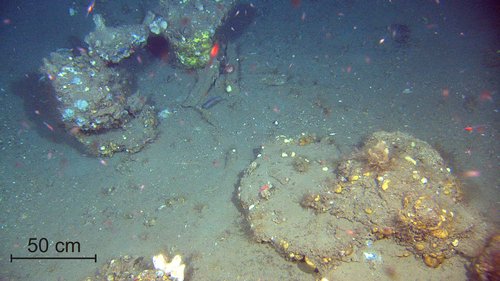 Figure 4. Carbonate crust forming a plate and a bridge. See the white spot on the plate likely corresponding to bacterial mat.

Blocks of carbonate crust show different shapes and sizes (Figures 3, 4 and 5). Originally carbonate crusts are formed directly below the seafloor. As they at present occur on top of the surrounding sediments, there must have been a considerable erosion in the area. It is no observation of strong bottom currents, so we infer that most of the crust must have formed before or at the same time as the pockmarks were formed. 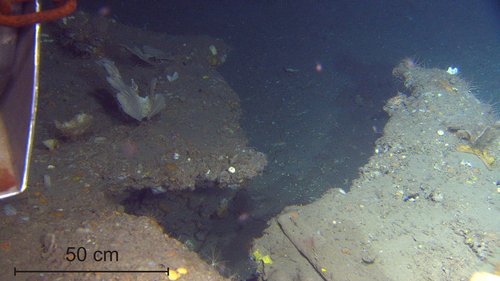 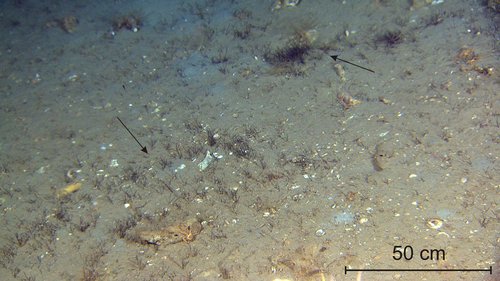 A TOPAS line has been acquired across the basin showing pockmarks (Figure 7). The carbonate crust area seen on video corresponds to an area of hyperboles at the surface of the TOPAS data. This seismic character may be an indicator of the occurrence of carbonate crusts. Then at least one more area could be covered by these crusts along the TOPAS line of Figure 7.

Figure 7. TOPAS line showing a laminated unit (commonly representing soft and fine-grained postglacial sediments). The carbonate crusts found in the video line correspond to a disturbed area. Two other similar facies are observed along this line. For location see Figure 2.

The seacrets of the shelf edge
MAREANO’s autumn cruise 2015