Cruise diary: The MAREANO project has mapped one of the most bountiful parts of the Barents Sea, finding that the sea bottom is covered in iceberg plough marks from the last ice age, large rocks, pockmarks and a multitude of trawl marks. The latter reflect the large quantities of shrimp and fish harvested by the fishing fleet from this highly productive area.

When we lowered our video camera towards the seabed here, it was like driving a car in a snowstorm, with “snowflakes” swirling around in front of your windscreen. In the north, the largest of these flakes were comb jellies and arrow worms, while further south they were krill and opossum shrimps. On the sea floor there were stones covered with sea anemones, waiting for prey to float past, and in many places there were caves built by animals that protect themselves down in the soft clay. Over 100 species were observed by the video camera, including large quantities of sea anemones, sponges, starfish, northern prawns, cod, haddock, redfish and flatfish. We were left with the impression that the area is mother nature’s pantry, full of food for humans and animals alike.

We observed large numbers of trawl marks in some parts of this area, which is known as “Barents Sea South East”. The highest densities of these marks on the seabed (over 10 per 100 metres) were observed in the north, right by the border with the Russian zone. These densities are many times higher than those previously observed by the MAREANO project, and illustrate that the shrimp and fish resources in the eastern part of the Norwegian Barents Sea may be more attractive than those in the areas with lots of sponges in the western parts of Tromsøflaket.

The impact of trawling

Intensive trawling activity can have an impact on benthic fauna. For example, benthic organisms that move slowly (e.g. sea anemones), or don’t move at all (various sponges), can become trapped in deep trawl marks (see photos). However, we don’t know whether this has a positive or a negative impact. We have also noticed that cod tend to like hollows and cracks, including trawl marks. 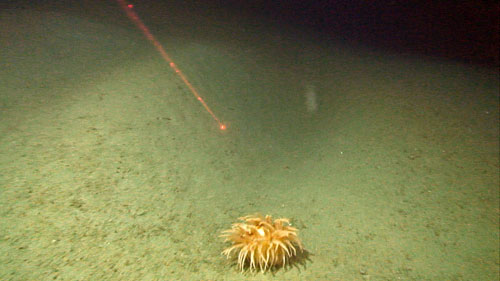 A sea anemone down in a trawl mark. 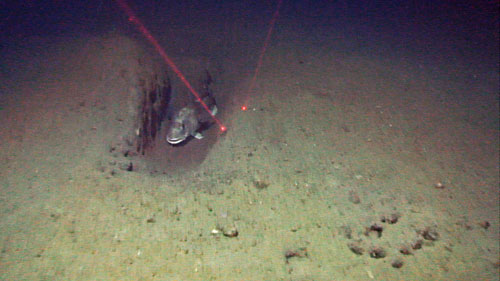 A cod that has chosen a trawl mark as its hiding or resting place. 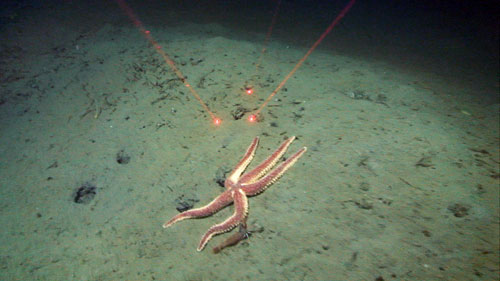 A large starfish (Urasterias linckii) climbs up the steep side of a trawl mark on the seabed. One of the many northern prawns (Pandalus borealis) that we observed can be seen swaying in the current to the right of the starfish. The distance between the red laser points is approximately 10 cm.

If a trawl net catches on a large rock and overturns it, animals like sponges, hydroids, bryozoa and sea anemones that have attached themselves to the rock may die. Other possible impacts of trawling include a reduction in the numbers of vulnerable species, or even their complete disappearance. It is impossible to calculate the extent of this, however, without “untouched” areas to compare with. Vulnerable species may include ones that stand upright, such as the sponge Asbestopluma sp. and the hydroid Corymorpha sp., or species that rest on top of the clay sediments and are unable to withdraw below the surface when a trawler approaches, such as the sea anemone Liponema milticornis (see photos). 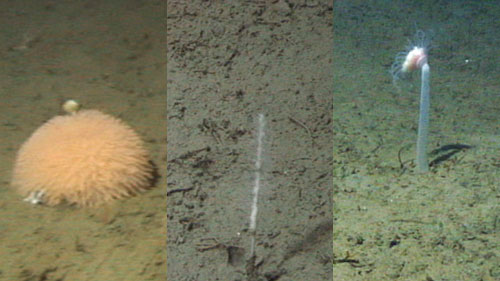 Are species such as the sea anemone Liponema milticornis, the sponge Asbestopluma sp., and the hydroid Corymorpha sp. vulnerable to bottom trawling? 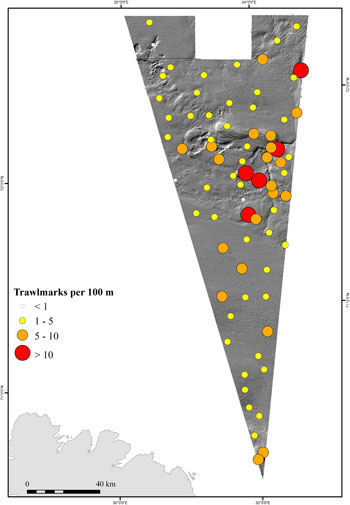 Number of trawl marks per 100 metres in the Barents Sea South East. These results were obtained by filming the seabed during MAREANO expeditions. (Map: Valerie Bellec).

The MAREANO project’s August expedition has now been completed. During the expedition we filmed 86 transects, each 700 metres long (giving a total of 60,200 metres of seabed surveyed), and we took samples of deep sediments, the seabed surface and water just above the sea bottom from a total of 16 sites.

One area we surveyed was the area previously disputed by Norway and Russia (“Barents Sea South East”). We also went to the “Finnmark East” area, as well sailing east of the Varanger Peninsula. Along the way, we have recorded our observations in expedition diaries, which are linked to at the bottom of this page.

That’s all for now! Expedition leader Lis Lindal Jørgensen and the MAREANO team from the Institute of Marine Research and Geological Survey of Norway thank you for your interest!

All diarys from this cruise:

Bivalves in the Barents Sea are still surprising
MAREANO expedition ahead of schedule
Environmental samples from new areas of the Barents Sea
Salt diapir and gas leakage on Tiddlybanken
The south east Barents Sea: the kingdom of the sea anemones
A seabed full of pockmarks

Bivalves in the Barents Sea are still surprising

Cruise diary: The bivalve expert, Dr. Graham Oliver from the National Museum of Wales, is on his second cruise with the MAREANO programme aboard the G.O. Sars. He is continuing to build a library of DNA samples of the bivalve “Thyasiridae”.