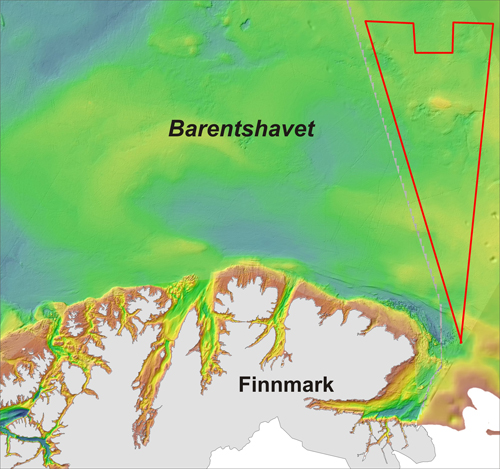 A special feature of the seabed in the Barents Sea is the extremely high number of pockmarks. A large number of pockmarks has been known for quite some time, but the new high resolution depth data collected by MAREANO documents and proves how numerous they are (Figures 1 and 2). Each pockmark is usually 20-30 m in diameter and 2-4 m deep. Many places the pockmarks are so numerous that they overlap. 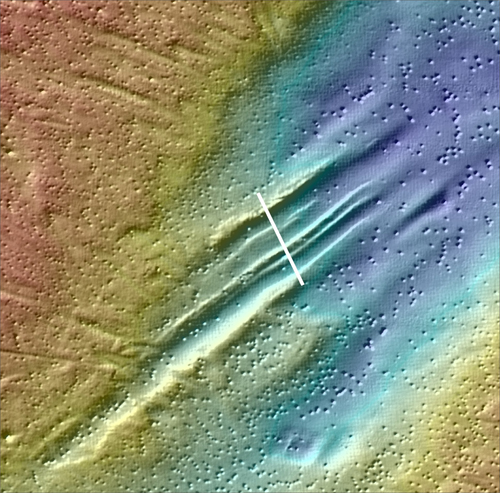 Figure 2. High numbers of pockmarks at the seabed in the Barents Sea. This area is located in the northwestern part of the map area in Figure 1. The white line shows the location of a 700 m long video transect across a furrowed seabed. The furrows were probably created by icebergs that touched into and scraped the seabed at the end of the last ice age. Blue colours show areas with deepest water, while red colours show the shallowest areas. Water depths along the video line are around 295 m.

Pockmarks in the seabed have been studied for tens of years, also in Norway, but there is still no complete understanding of how, why and when they have formed. One assumes that the pockmarks may form by sudden blowouts of gas (e.g. methane or CO2) and or fluids (e.g. ground water) from pockets below the seabed. Another and possibly more common process is that gas and/or groundwater slowly leaks from the seabed, thereby preventing fine grained particles to settle. Both processes may cause depressions (pockmarks in the seabed).

There is much larger uncertainty related to why pockmarks form, and the cause may vary from one area to the other. In the Barents Sea, several authors have pointed to hydrocarbons (oil and gas) leaking from reservoirs deep below the seabed. Gas leaking from the seabed up and into the water column has been observed. The seabed of the Barents Sea was strongly eroded by icebergs during the last ice age, and several hundred metres of sediments were removed. Glacial influence may have caused leaking oil and gas reservoirs.

Another possible explanation may be melting of gas hydrates. During the last ice age, large parts of the Barents Sea were covered by ice. The ice cover was so thick that the ice rested on the seabed (was frozen to the seabed), while in other places it moved along the seabed and scraped it. Gas hydrates, which consist of frozen gas and water locked together, accumulated within and below the seabed. At the end of the last ice age, when the ice cover became thinner and lifted off the seabed and finally broke into floating ice bergs, the temperature within the seabed increased at the same time as warmer seawater entered the area. The temperature increase caused thawing of gas hydrates, and within a period of, perhaps, only a few tens to a few hundred years large quantities of the green house gas methane may have been released. This gas may have caused the enormous number of pockmarks seen today. It is thus possible that the majority of the pockmarks were formed over a relatively short period of time 10 000 to 12 000 years ago.

MAREANO uses video camera for the biological and geological mapping of the seabed,. The pockmarks of the Barents Sea occur so closely that they often overlap, and it is almost impossible to avoid transecting them. During the 2013 mapping cruise we have already found indications that the seabed is leaking methane gas. A lot of work remains before the scientific community fully understands the high density of pockmarks in the Barents Sea. The work carried out by MAREANO will contribute to resolve the remaining questions.