Adventures above and below deck

I had never been a sailor, so I had no idea what was in store for me.
“Lots of young people, lots of women,” is what the leader of the expedition Anne Helene Tandberg had told me.
“There will be lots of giggling and laughter.”
“What do you do in your time off?”
“We watch films, for example. Or we knit.”
Right? So, out at sea I was going to be with a bunch of giggly ladies sitting in a row on a sofa watching films and knitting – if they weren’t busy with some kind of fish or creature from the sea bottom that I had never heard of.

Then came the day for me to join the ship. The incredibly big boat was docked at Kristiansund, and I climbed up the incredibly steep ladder with my backpack. Subsequently life at sea has taught me that backpacks really should be hung upside-down from the mast, in order to get the demons out, but luckily no-one took my backpack. Just in case, I had bought a bit of food in Kristiansund to take with me. You don’t want to starve when you’re going to be at sea for twelve days, I thought. It would turn out to be the most superfluous shopping trip in my life: onboard a delicious hotel-style buffet was waiting for me. Amongst other things, the steward and his assistants served up hot dishes, a range of salads, olives, sundried tomatoes, a seafood “cabaret”, scrambled eggs, smoked salmon, gravlax, hot-smoked salmon, cured meats, ham, maize, cheeses and bread. I wondered whether it was a one-off, some kind of welcome-aboard gesture, but if so the gesture was repeated – every single day! 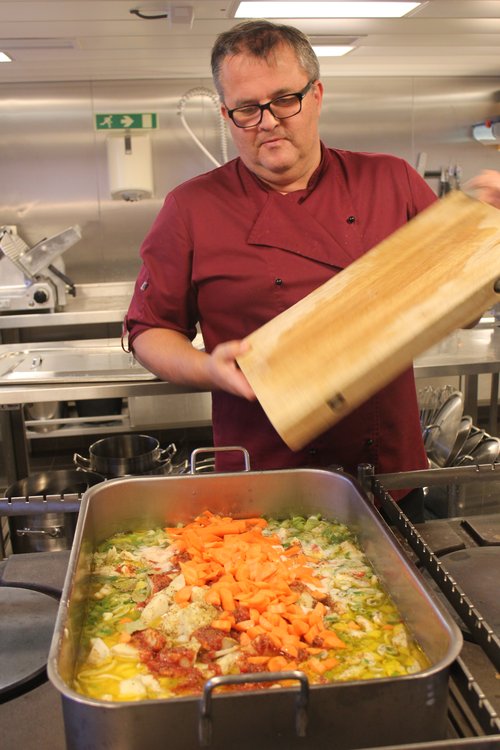 The steward Henning Gjervik doesn’t let the waves disturb him while he makes bacalao.

And as if that wasn’t enough – the galley staff even had time to be friendly.
“They look after us,” explained one of the scientists.
“They check how many buns have been eaten, and make sure that everything gets polished off. If you hadn’t eaten, or if you had been sick in your cabin, I can guarantee that they would have found out – because they care. I find that reassuring.” 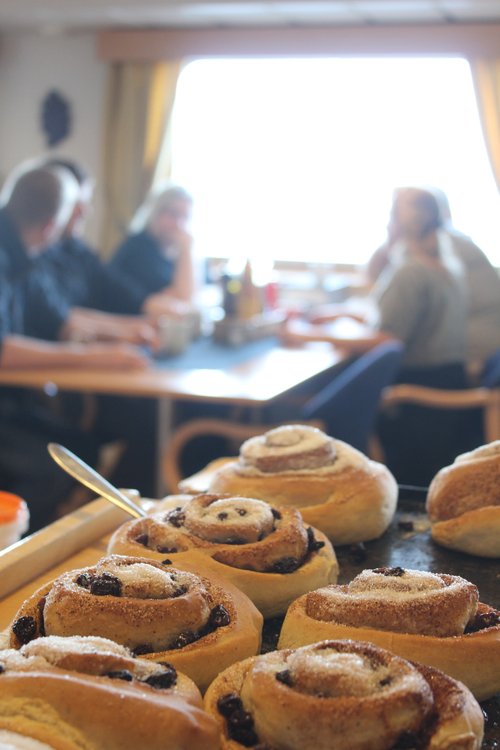 Saturday treat in the mess.

Personally I feel reassured when I go to bed at night. I am rocked to sleep each night, and although sometimes the waves are a bit higher than other times, I completely trust whoever’s up on the bridge, whether it be the captain, chief officer or second officer. They have thousands of buttons to push, but they always seem to know when to push which one. And if you want to enjoy panoramic views of the Norwegian Sea, you’re welcome to visit them! I shouldn’t take any notice of the sign on the door saying “authorised personnel only”, they told me. Apparently everyone is authorised.

Lower down in the boat, the crew, engineers and scientists were working 24/7 to get all of their tasks done. After making 51 Hollywood-style productions of the sea floor in the Mørebanken area, and after raising and lowering the video camera (or “Campod”, in technical speak) countless times, they were still far from finished. Now they needed to lower another set of tools down onto the sea bed, each of which would obtain a different kind of sample. Once we had the samples, we could put on our oilskins, safety boots and rubber gloves and inspect them properly: Hi, red sea cucumber! Hi, little sand shrimp! And hello, thick-spined sea urchin! Finally we get to meet, face to face! Or do we: where exactly is your face? Are those things eyes? Oh, those are the eyes! And now you’re going to be put in formaldehyde! Dear oh dear.
“I never thought that I would have to kill animals when I became a biologist,” says one of the scientists. 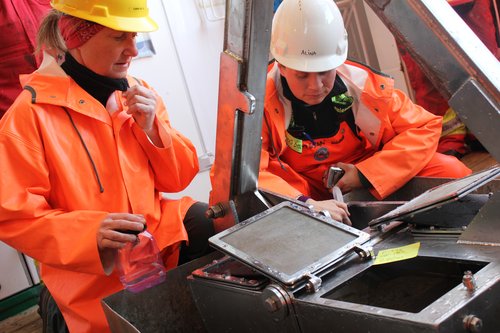 Out at sea, people are kind.
“We’re like a big family,” lots of people told me.
That was my impression too.

There were lots of giggly women. But there were also a few men. I didn’t see any knitting, and we didn’t watch many films, either. Someone suggested that they get their fix of television watching the live videos of the sea bed. I can understand that.

As a journalist, the best thing was that no-one looked grumpy when I wanted to ask a question – it genuinely seemed that everyone was really nice, and that they were trying hard to make my life as easy as possible. Thank you so much for letting me join your expedition – it has been a great experience for me!

Guests on our expedition

On this year’s autumn expedition, in addition to the usual mix of scientists and technicians, we had the pleasure of having two guests. They were the artist Pippip Ferner and the journalism student Silje Pileberg, who hoped to expand their horizons for the benefit of their own projects, while also shedding light on our research in ways that we would be unable to do.

Cruise report: The Sula Reef area in mid-Norway is known to contain numerous coral reefs, but less is known about coral reefs outside the designated protection area where trawling is prohibited. During transit between the Iverryggen and the Sula reef marine protected area (MPA), we used the opportunity to look for new and undiscovered coral reefs.