In the Norwegian Sea, the following areas will be surveyed in 2014: Sklinnabanken, Sklinnadjupet, parts of the shelf edge, and Stadhavet. The multibeam surveys in these areas will take place between May and October this year. In the Barents Sea, bathymetric mapping has continued throughout the winter due to unforeseen delays in 2013. The areas that were been put on hold are to be completed during May 2014. All areas are shown in the map below. 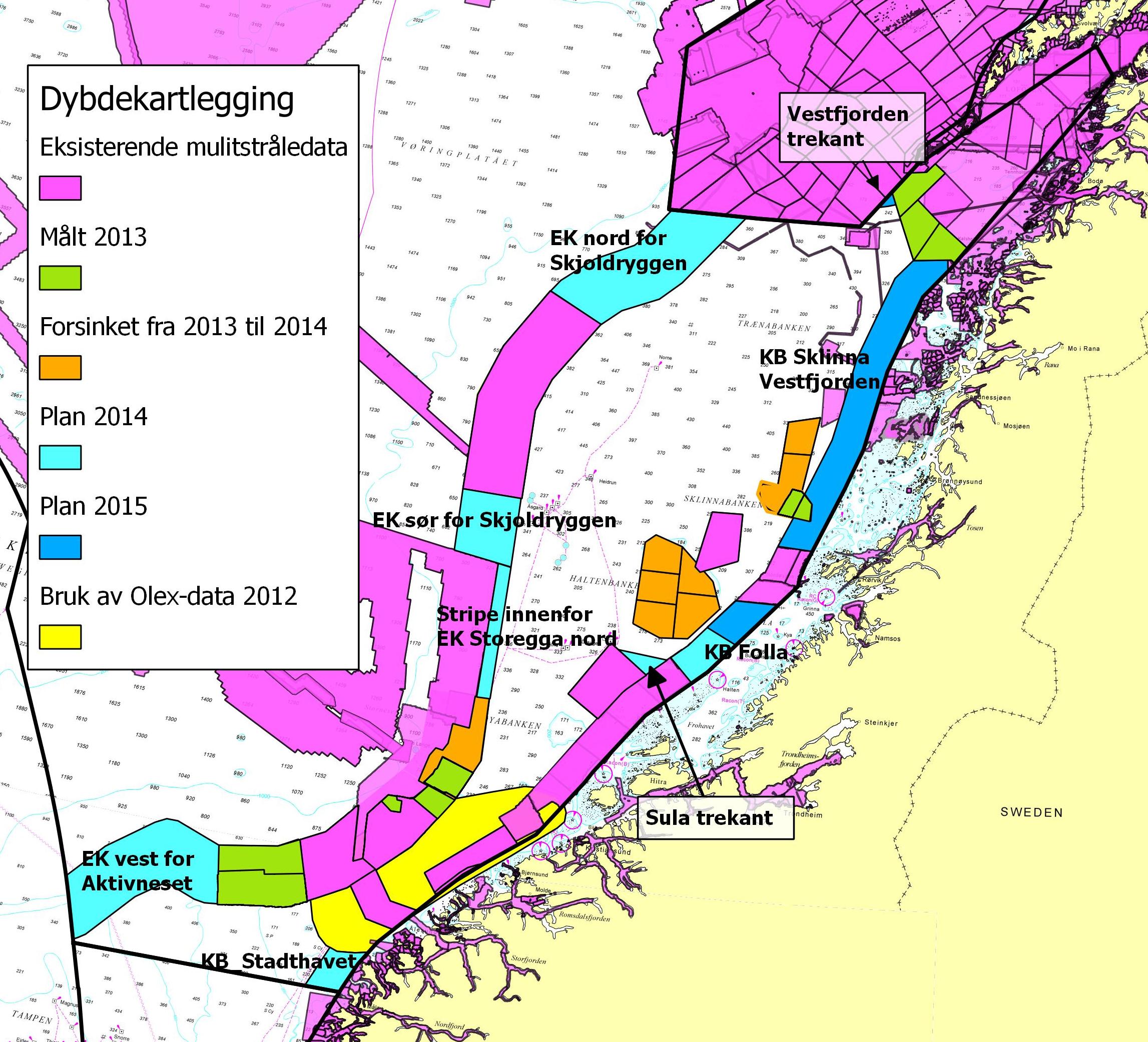 Overview of completed and planned MAREANO bathymetric mapping in the Norwegian Sea. Areas to be mapped in 2014 are shown in orange and light blue. 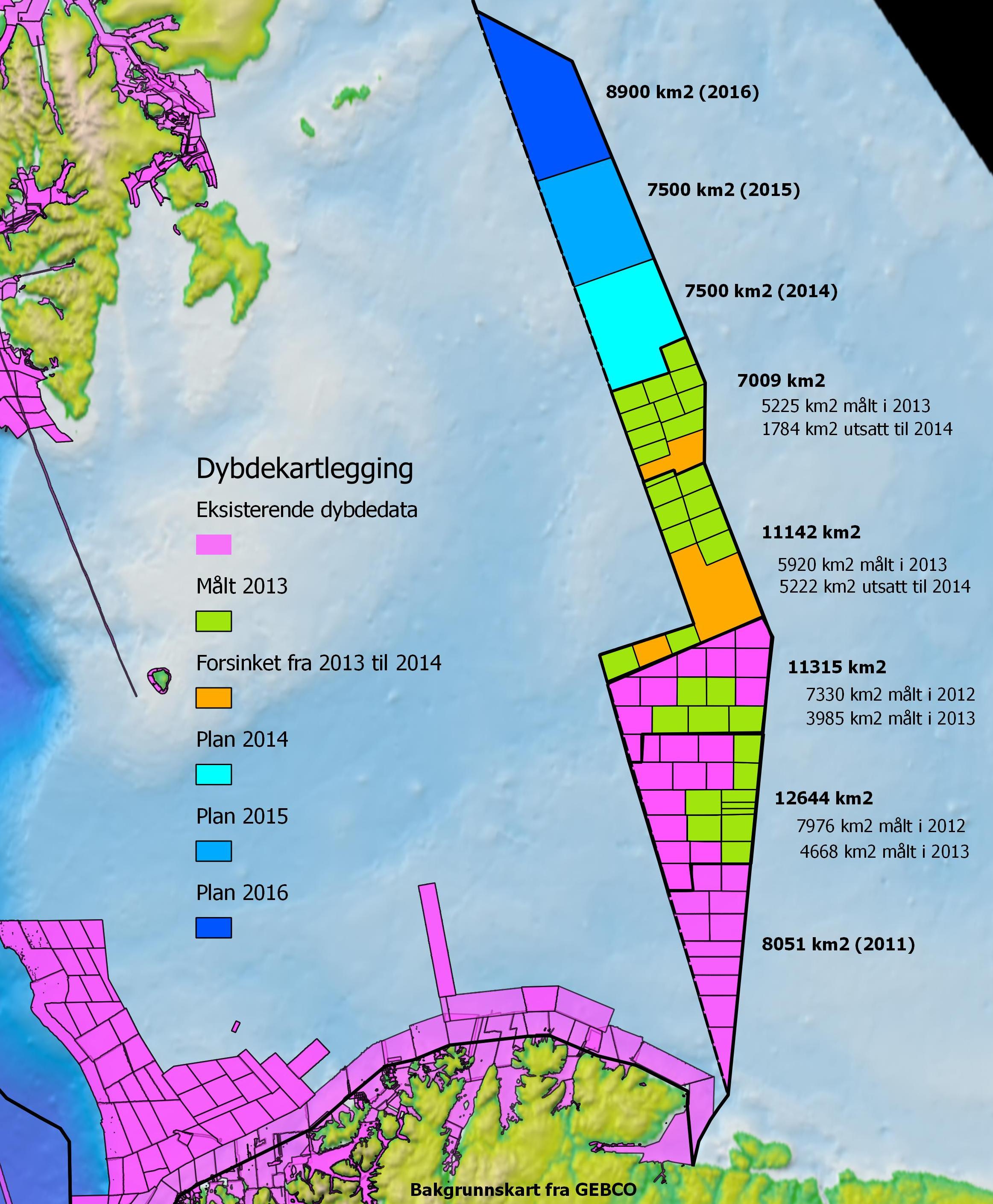 Overview of completed and planned areas to be bathymetric surveyed in the Barents Sea. The areas to be measured in 2014 are shown in orange and light blue.

Three surveys are scheduled this year to conduct biological, geological and chemical sampling.The first cruise will kick off on April 13, when the research vessel G.O. Sars will leave the city of Tromsø in Northern Norway. Sampling will be carried out off the coast of Finnmark, the northernmost  Norwegian County, and in the new areas along the Russian/Norwegian border (see figure below). This survey will end on April 26. However, sampling in these northern areas will resume on August 18, finishing on September 4.

A third survey, this time with the research vessel Johan Hjort, will take place from June 16–26, and will head to the shelf edge just northeast of Mørebankene in the Norwegian Sea – to an area named Storneset. Regarding seabed sampling in 2014 MAREANO will have 44 survey days in total. 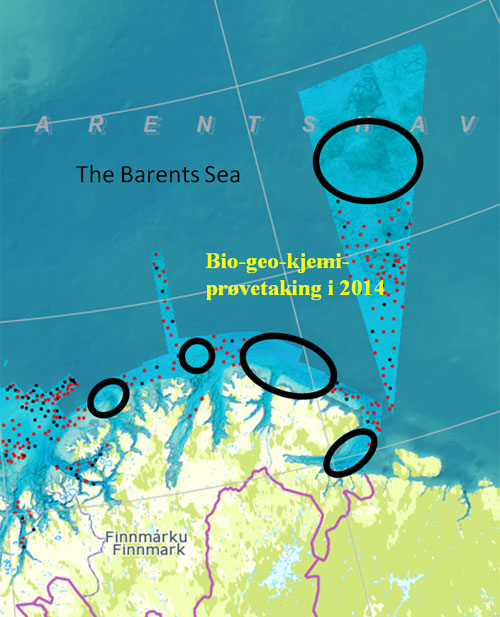 Areas of the Barents Sea, showed by black circles, that are to be sampled in 2014 with regard to biology, geology and chemistry sampling. Earlier sampled stations/points are shown as black and red spots.

Area in the Norwegian Sea that is to sampled in 2014 relative to biology, geology and chemistry. Earlier sampled stations are shown as black and red spots.

In addition to the regular crew aboard the research ships, the MAREANO staff comprises 12 scientists and technicians from the Geological Survey of Norway (NGU) and Institute of Marine Research. The MAREANO staff includes geologists, biologists, chemists, computing/GIS-experts, and instrument engineers. Guest-researchers from the Maritime Museum/Aquarium in Gothenburg and Bergen Museum/University of Bergen will also join parts of the MAREANO surveys this year.