Carbonate crust revealed in pockmarks on the mid-Norwegian shelf

Video footage acquired during MAREANOs latest cruise at Skoldryggen has revealed why the inside of pockmarks at 440 m depth on the seabed appear harder than the surrounding seabed, when seen on multibeam backscatter images. Carbonate crusts have been found at the bottom of the pockmarks (Figure 1). 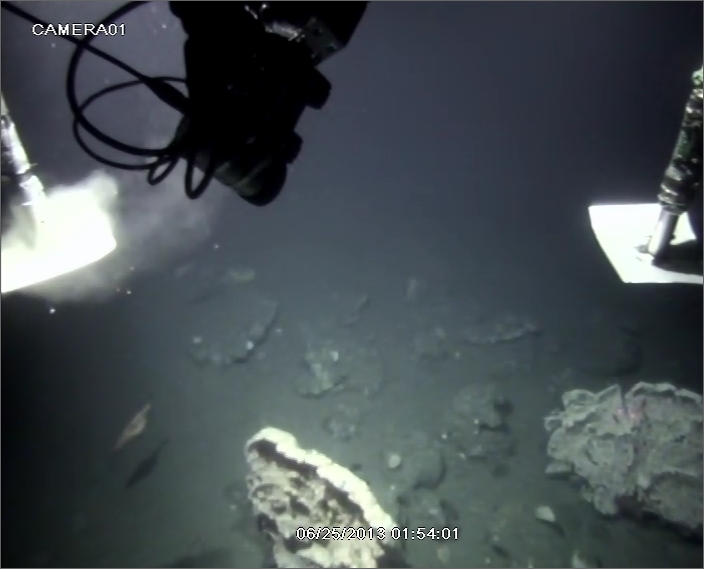 Figure 1 showing an example of carbonate crusts found in a pockmark from Skoldryggen. Two coral trees are observed growing on the crusts.

Pockmarks are a relatively common occurrence on the seabed, typically in deeper areas covered by soft sediments. They are usually more or less circular depressions which are often several metres deep and which have diameters of tens of metres at Skoldryggen. Bathymetry data from multibeam echosounders can reveal the location and extent of these depressions while the strength of the echo from the seabed – multibeam backscatter data -  gives an indication of the bottom sediment type. Backscatter signals from within pockmarks are often the same as the surrounding seabed, but in some places, like at Skjoldryggen (Figure 2), backscatter returns are noticeably stronger from within the pockmarks (Figure 3). High backscatter usually indicates coarser, more varied sediments than low backscatter (see Sampling of seabed sediments on Skjoldryggen, mid-Norway), yet the reason for high backscatter inside the pockmarks cannot be certain without direct observations such as those we obtain with CAMPOD towed video. 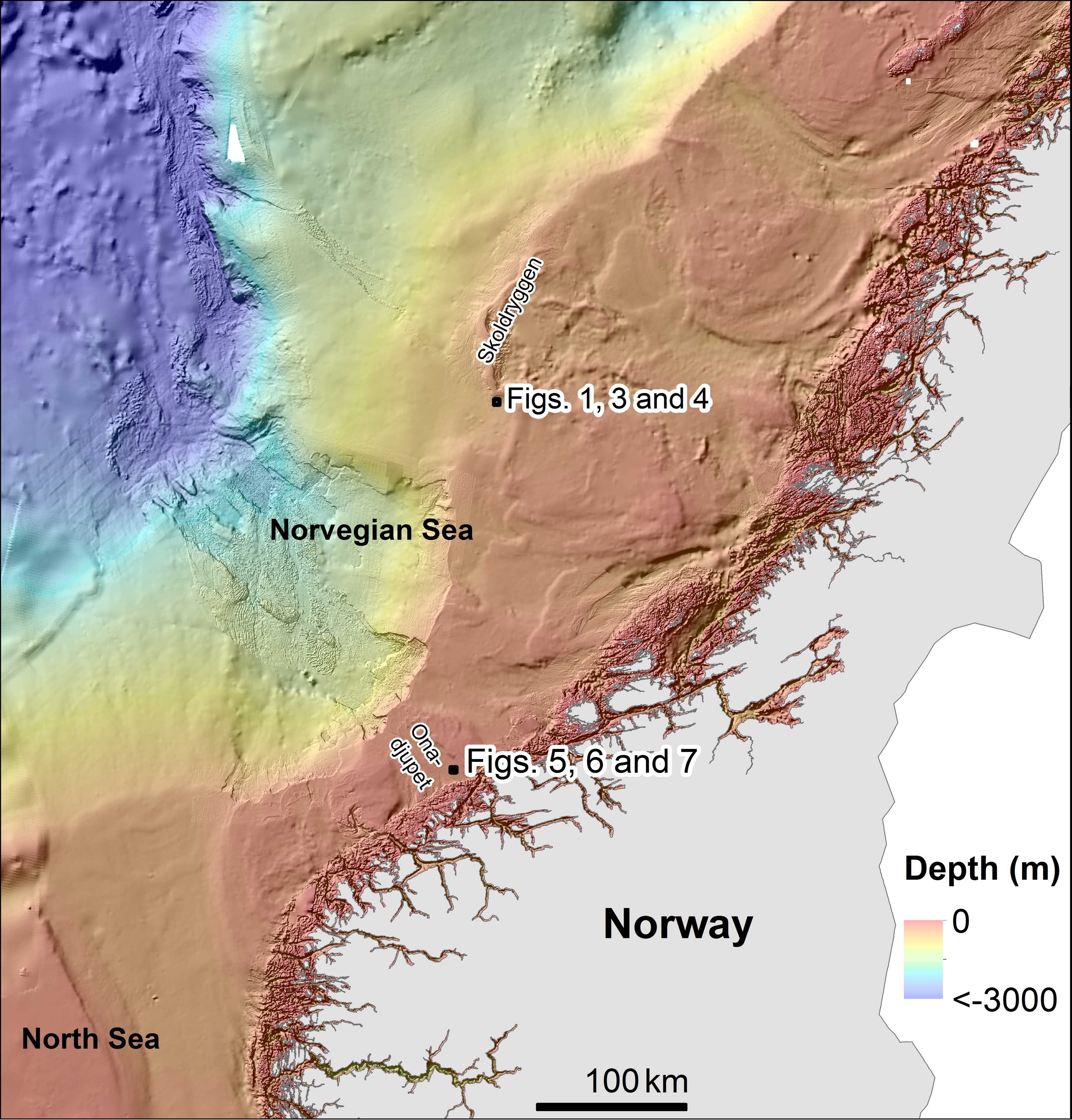 Figure 2. Mørebanken area showing the location of  the different figures in Skoldryggen and Onadjupet (black squares).

Figure 3. Details from Skoldryggen area showing water depth on the left panel and backscatter on the right panel. The black line corresponds to the location of the video line. Pockmarks appear like depressions showing higher backscatter than the surrounding areas. See Figure 2 for location. 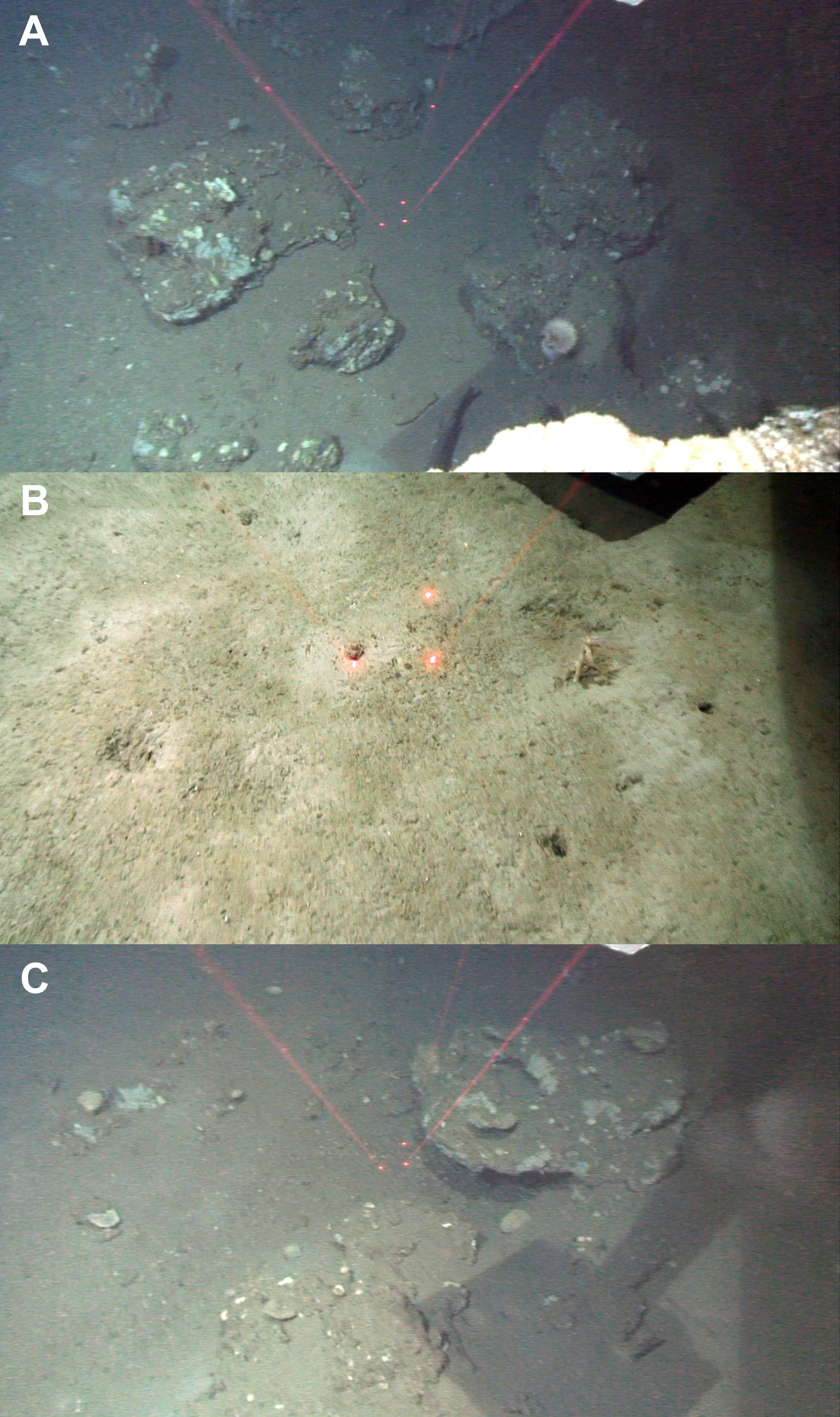 Figures 4A and 4C show carbonate crusts in 2 pockmarks. Figure 4B shows sandy mud between pockmarks. See Figure 3 for location.

High backscatter signals from the base of pockmarks has also been found at Onadjupet (Figure 2). Video data were acquired here during a MAREANO cruise in 2012 and this too was found to coincide with the presence of carbonate crusts (Figures 5 and 6) but in this case the crusts occur together with bacterial mats. These bacterial mats are living colonies of microorganisms which thrive in the presence of certain chemical conditions and which often occur where gas is leaking from the seabed. The presence of gas leakage in this part of Onadjupet is confirmed by multibeam water column data which detects acoustic anomalies in the water column including fish shoals (due to air in the swim bladders) and gas leakages. Gas is detected because the rising gas bubbles contrast sharply with the acoustic properties of the  surrounding water. Within the pockmark area at Onadjupet, multibeam water column data have shown three gas flares indicating that gas is actively escaping from the seafloor in this area (Figure 7). 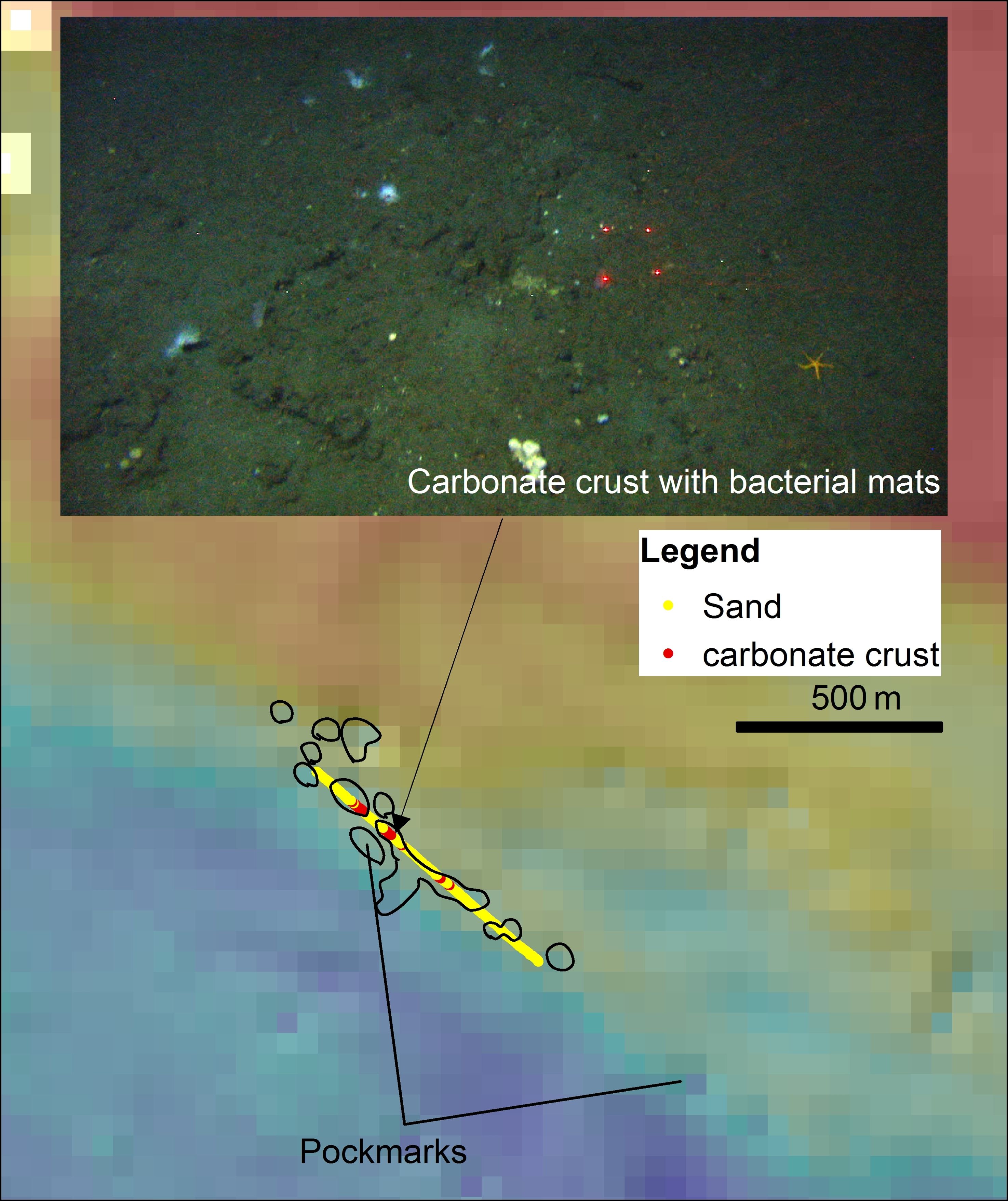 Figure 5 showing bathymetry grid of 50X50 m resolution due to military restriction. Pockmark location boundaries have been drawn by hand along the video lines. Carbonate crusts occur inside pockmark depressions. White spots on the picture correspond to bacterial mats associated with carbonate crusts. 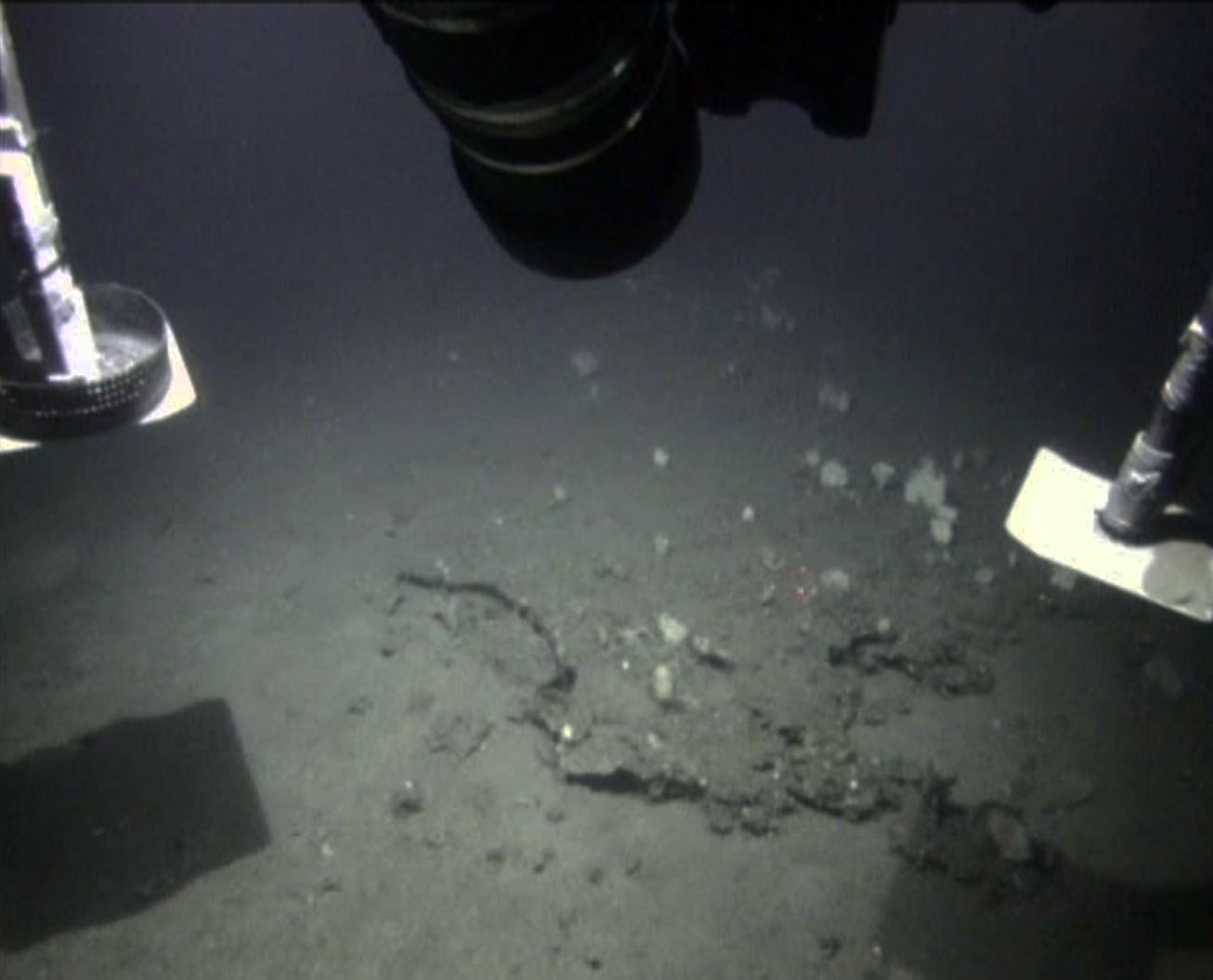 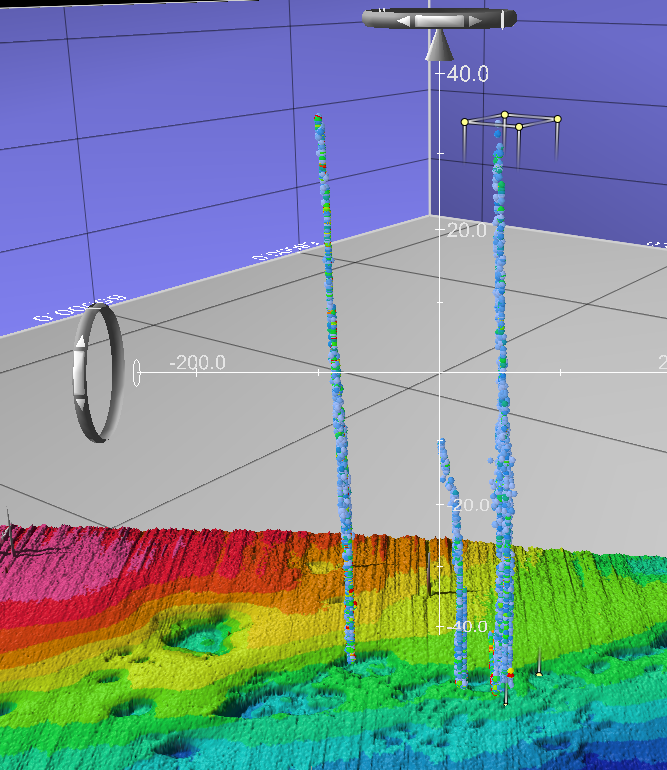 Figure 7 showing three gas flares from water column data (Onadjupet). Note many pockmarks. The data are displayed with Fledermaus Midwater. 5x vertical exaggeration. Stripes at the seabed are artefacts, and not real structures.