The areas mapped through the MAREANO cooperation are first mapped by using multibeam echo-sounding instruments with backscatter signals, resulting in detailed seabed terrain maps. Secondly, and based on these depth data, sampling sites for physical and video data collection are selected. The results of this sampling activity contribute e.g. to the production of maps showing vulnerable habitats and sediment composition.

Read more about the methods.

2013 is the most intensive year so far in the MAREANO program with 62 days of ship time, starting June 12 with the collection of biological, geological and environmental seabed data at the shelf edge off Nordland County. In the period August – October, the Barents Sea, Mørebanken and areas close to the coast of Nordland will be visited.

The survey season begins in an area called Skjoldryggen, located at the shelf edge off Nordland where ca. 6.000 km2 will be surveyed in the period June 12–30. Approximately 60 video stations, each consisting of 700 meter long transect lines, and 12 stations comprising geological, biological and chemical sampling are to be established.

The next survey, using RV G.O. Sars, will be launched July 31 from Tromsø, setting course towards the southern part of the previously disputed area in the Barents Sea. MAREANO has been collecting depth/terrain data from this area for the last two years, while the first biological, geological and chemical sampling will take place this year. This 22-day survey will include, just as for the above mentioned Skjoldryggen area, ca. 60 video stations and 12 stations including physical sampling.

"G.O. Sars" will be used again during the period from September 22 to October 11 at the Iverryggen, Sula, Storegga north, the Mørebank area, and the coastal area between Vikna and Kristiansund (see figure below).
The collected data on depth, terrain, biology and geology, will provide invaluable information for the modeling of habitats and biotopes in the surveyed areas, as well as for other data products. The results are presented as maps at www.mareano.no as soon as the data analyses are finished. 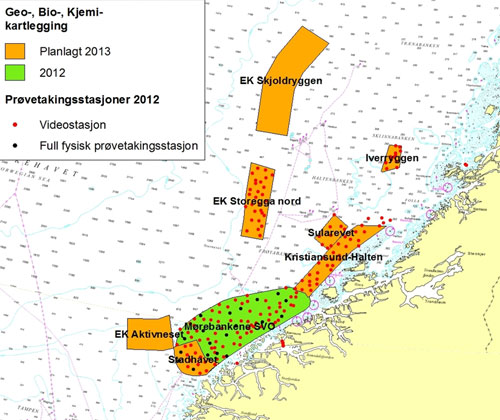 Map of the areas to be mapped by MAREANO in 2013 by geological, biological and chemical sampling, colored in orange. Areas in green were surveyed in 2012. "EK": shelf edge.

Bathymetric surveys – collecting depth data – are always carried out in advance of the geological, biological and chemical surveys. Data from the bathymetric surveys forms the basis for determining the location of the sites where physical sampling will take place during subsequent surveys. In addition, detailed depth data is important in order to control the video rig, which is being hauled just 1–1 ½ meter above the seabed.

The areas to be ensonified and mapped in the Norwegian Sea in 2013 are shown in the figure below. RV H.U. Sverdrup II, owned by the Norwegian Defense Research Establishment, started her mission April 6 at the Aktivneset, at the Mørebank area, where the ship is scheduled to finish May 2. The Norwegian Mapping Authority's ship, RV Hydrograf, will target the Vestfjord, the Sklinnabank and Sklinnadjupet at May 8, finishing her mission June 26. This survey will cover the outermost part of the Vestfjord area. The German company Fugro OSAE will target EK Storneset later this summer. Aktivneset is the area most urgent to map, as geological, biological and chemical survey here is scheduled to the autumn of 2013. 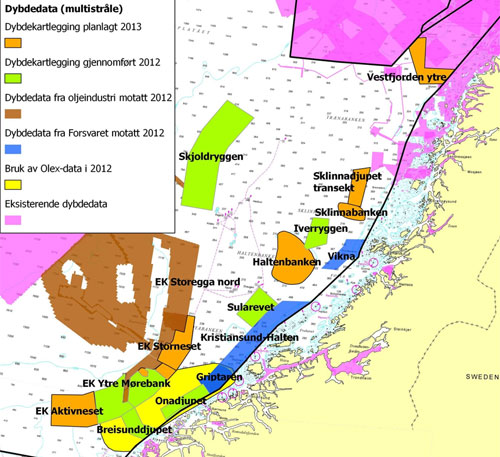 Orange color shows areas that are to be depth-mapped by MAREANO in the Norwegian Sea in 2013.

Depth mapping of the previously disputed area in 2013 has been already started by two vessels from FOSA. The areas to be covered are shown in the figure below. 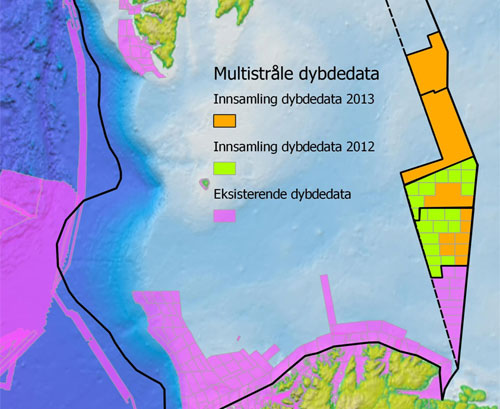 Areas to be depth-mapped in the Barents Sea in 2013.