Cruise diary: June 19, after half of the planned stations at Skjoldryggen was covered (30 video locations of which seven were also bottom sampling stations), the first leg of the cruise ended in Kristiansund. We have seen small dead coral skeletons (coral rubble) at several locations when using the video-rig Campod. Then, we have most likely passed reefs in their outskirts.

From fishers using bottom trawl or longline, it is known that there are cold water coral reefs at Skjoldryggen. Some information about coral reef occurrences in this area have also been provided by the Norwegian Fisheries Directorate’s previous cleaning-up of ghost-fishing nets (lost gillnets can continue to catch fish for years after they have been lost). Occurrences of the reef building coral Lophelia pertusa were noted during the retrieval of lost nets, and reported. 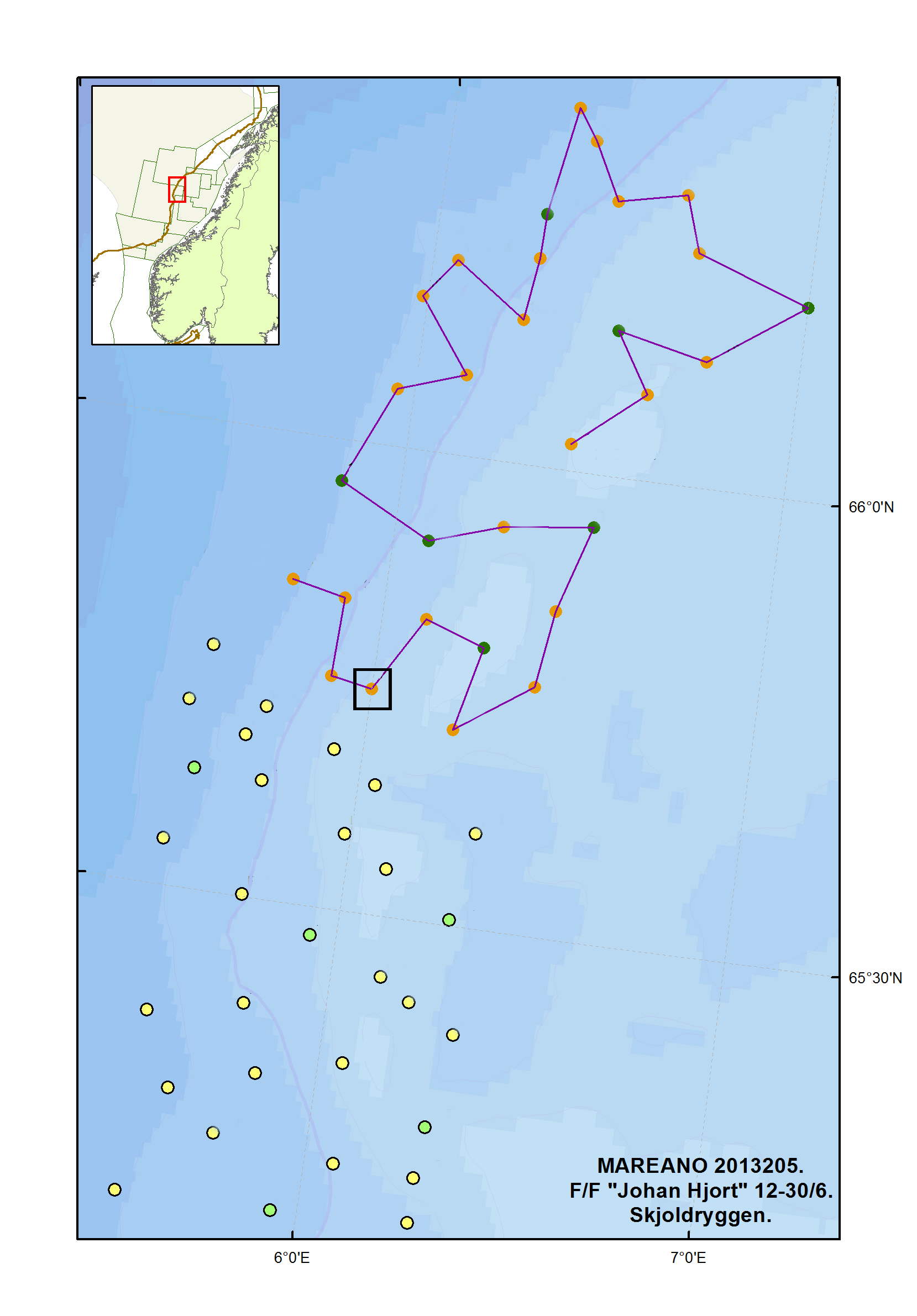 At the 22nd station of this cruise we finally encountered a well-developed reef area with several elongated reefs aligned side by side. The small box on the main map shows the location of this area.

These reefs have many similarities with other elongated reefs, such as those occurring in the Hola area, the Træna reef area, and in several areas of the mid-Norwegian shelf where the petroleum industries have mapped pipeline routes, and the seabed around platforms.

We passed five along the video line showed on the map above. Live Lophelia pertusa was observed on four of these. On the fifth reef, at the end of the line, up to north-west, we only observed dead coral. Most probably this reef is also alive, but we crossed the reef north of the living front of the reef. 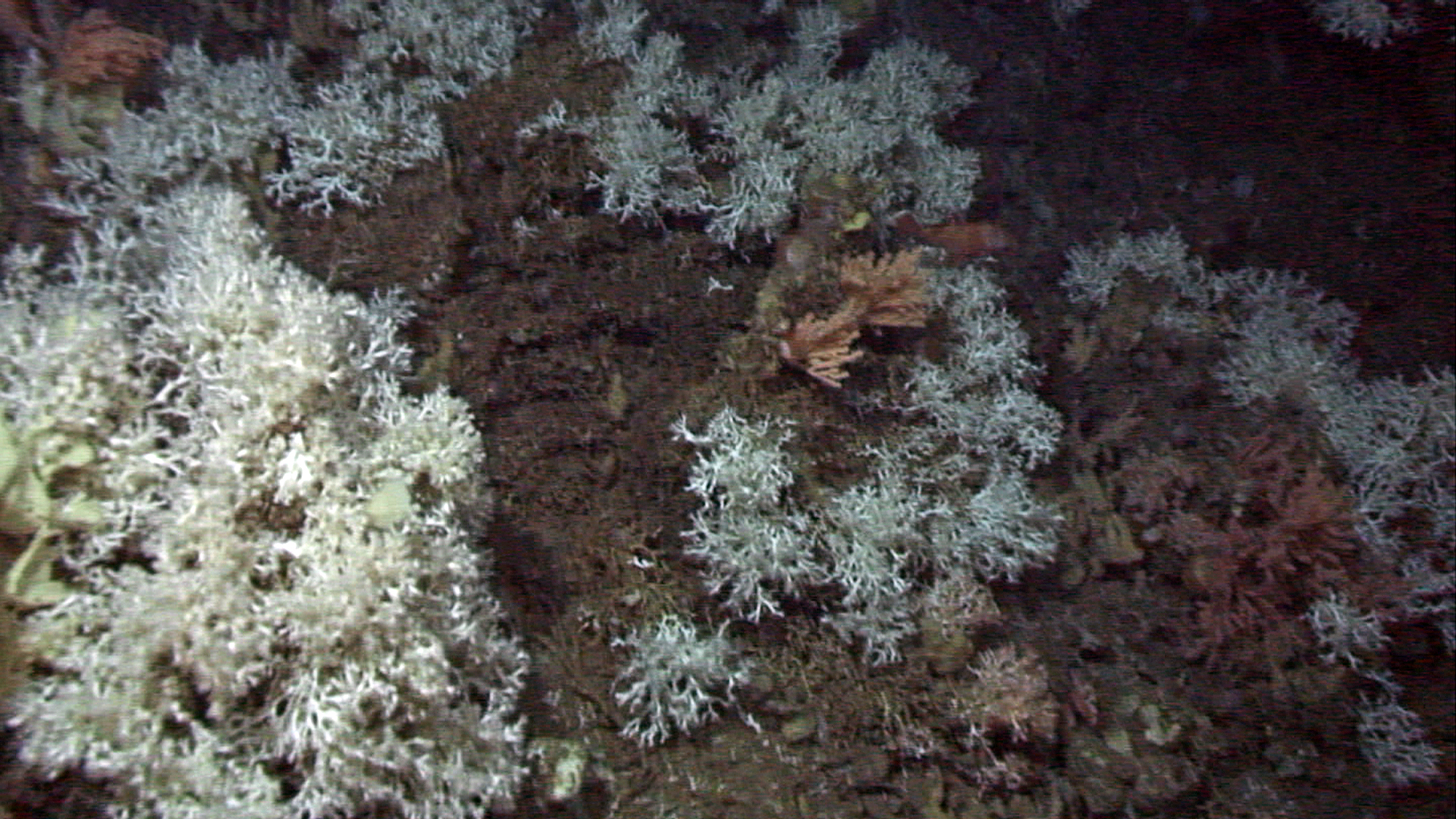 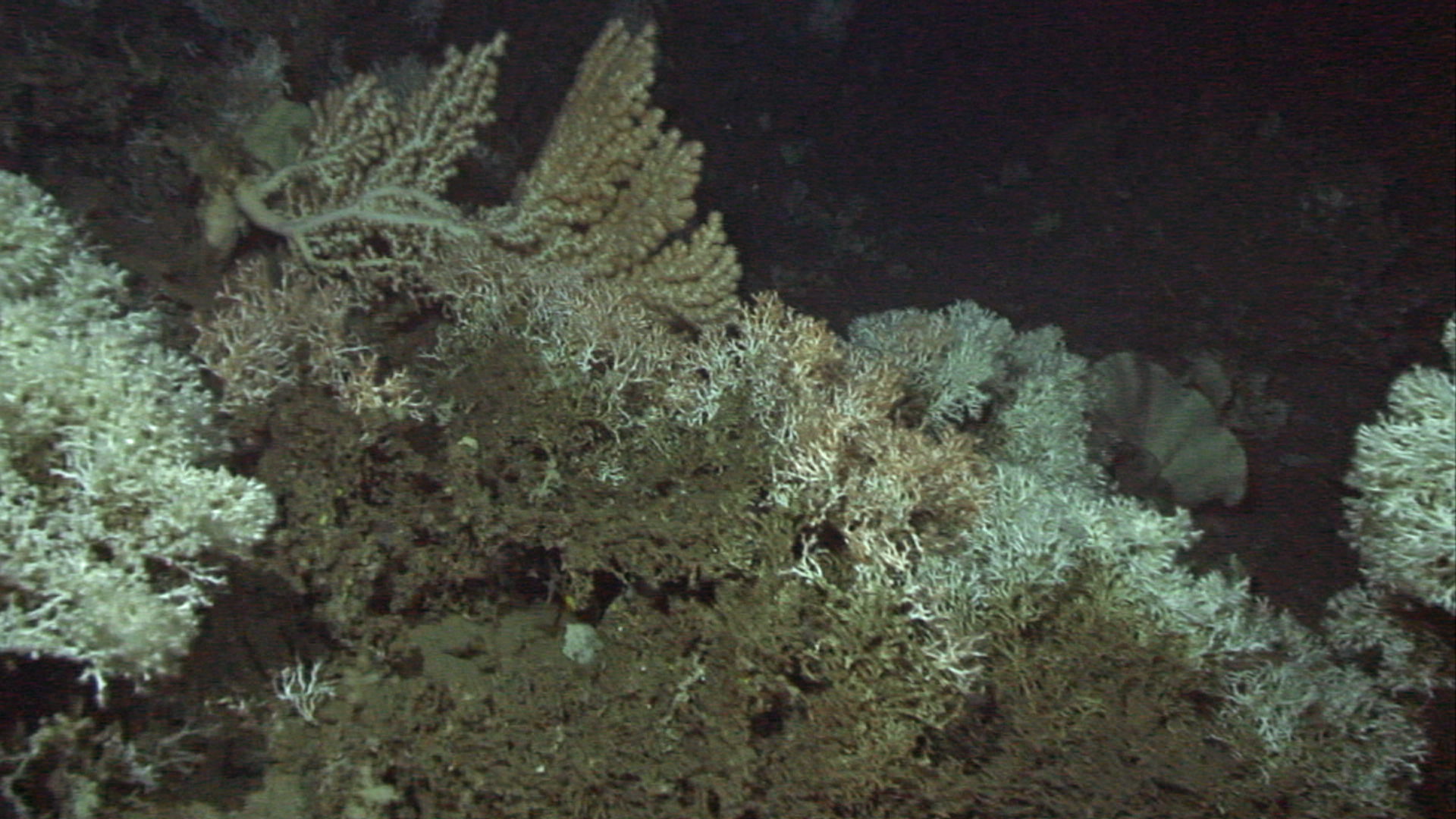 Figure 3 a and b. The Norwegian coral reefs are made by the stone coral Lophelia pertusa. On the reefs we normally also find gorgonian corals such as the sea corn coral (Primnoa resedaeformis – upper part of Fig. 3b) and bubblegum coral (Paragorgia arborea – lower part of Fig. 3b). 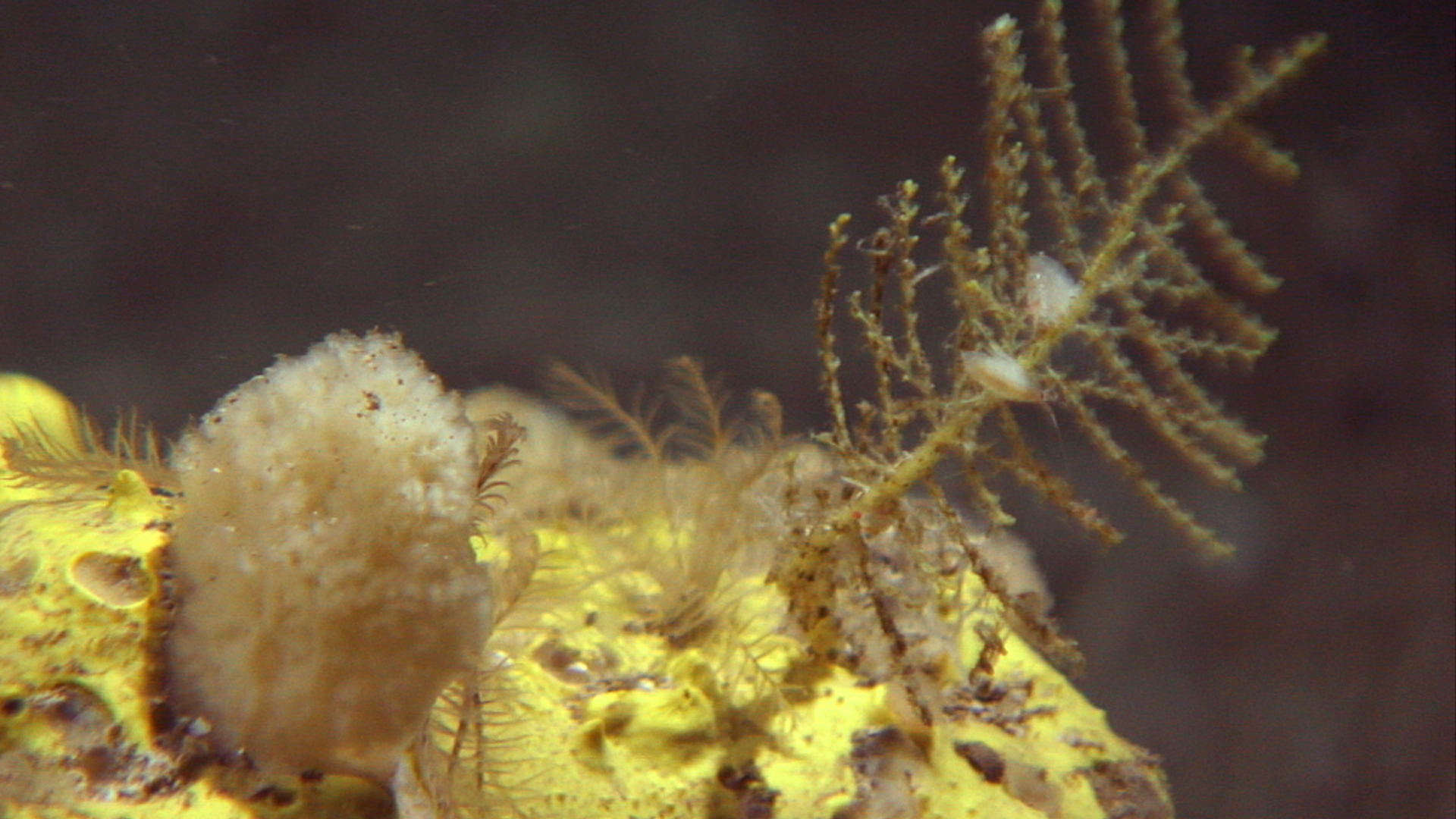 Figure 4. The cold water coral reefs are home to a great number of species from many animal classes. More than 600 species are documented from coral reefs along the Norwegian coast. In this image we see a sponge and a hydrozoan bush with amphipods attached to the yellow sponge Aplysilla, on on of the reefs at Skjoldryggen. 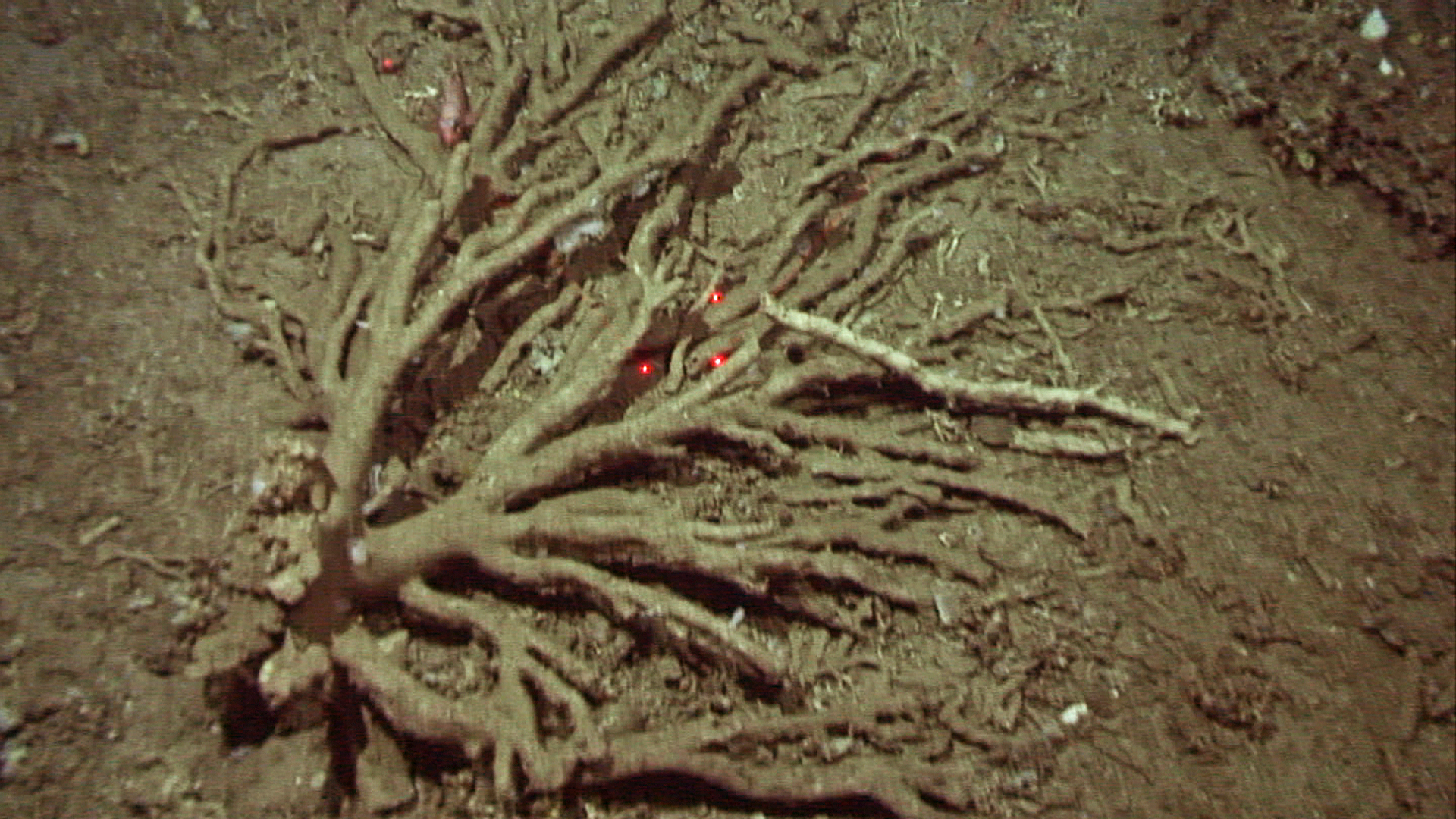 Figure 5. Clear signs of fisheries impact were observed at two of the reefs in the reef area described above. Damages caused by fishing gear can be difficult to distinguish from natural disturbance caused by natural breaking of old and large coral colonies. On this image we see a skeleton of a bubblegum coral. Large bubblegum coral colonies may flip over because of unstable foundation and strong currents, but in this case we found the skeleton in the middle of path of crushed Lophelia skeletons.