Cruise diary: MAREANO's first cruise of 2015 set sail from Tromsø last Friday bound for the new Norwegian area of the Barents Sea. Sixteen scientists and technicians will spend the next two weeks onboard the research vessel G.O. Sars, investigating one of the world's richest seas. The benthic environment and faunal communities over an area of 12 000 km2 is to be sampled while a total of 44 line kilometers across 60 sites will be filmed with high resolution video.

There is great excitement in the video operation room onboard, where geologists, biologists, chemists, engineers and computer specialists from the Geological Survey of Norway (NGU) and Institute for Marine Research (IMR), and several G.O. Sars crew members, are watching intently as the first video footage of the cruise streams live from the seabed. This is videofilm number 1 501 in the series since the MAREANO programme was launched in 2005.

The video rig "Chimeara" lands nicely at the bottom and as the camera pans around we get a good overview of the environment, bottom type and animals present before setting off on a 700 m long transect line, towed gently at a speed of 0.7 knots with Chimeara flying just above the bottom. Unfortunately we will have to wait to see what lies ahead, high water pressure at 206 m depth means sea-water has found its way into the vulnerable electric motor that controls the tilt function of the camera housing. Salt water and advanced electronics do not go well together but luckily our team of engineers is on hand to make the necessary repairs. Ten hours later the problem is fixed and we are back in action to complete the dive. We have also now continued to other sites without further problems

In MAREANO's decade-long history, around 1050 line kilometers of seabed  video have been filmed. That is the equivalent of half the length of Norway! On this cruise we plan to cover a distance of 44 km.

MAREANO often invites guests to take part in its cruises for mutual benefit. This time three researchers from the Portuguese Institute for the Ocean and Atmosphere are joining us. The experience they gain from participating in the MAREANO cruise will be brought forward in any future mapping of the Portuguese continental shelf and underwater mountains. 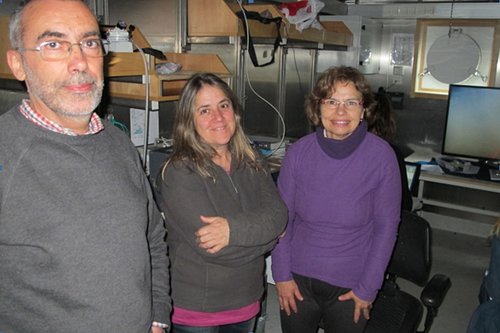 Guest researchers at MAREANO's first cruise of 2015. From left Victor Henriques, Teresa Drago and Maria José Gaudencio, all from the Portuguese Institute for the Ocean and Atmosphere.

On board the research ship G.O. Sars the seabed is studied thoroughly on a big-screen streaming live from the seabed. On-line logging includes describing sediment types, benthic terrain and biological communities and their distribution on the seabed in the eastern Barents Sea. All video footage is recorded continuously on board, backups taken and preparations made for further handling of the data. 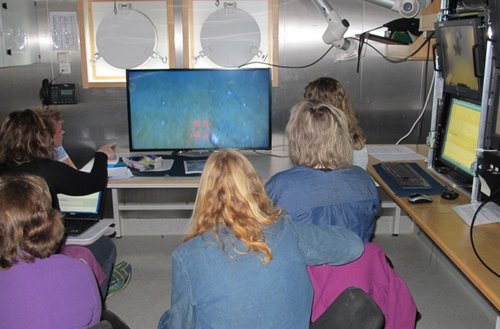 Top concentration among geologists and biologists on board the research ship GO Sars' video operation room.

After completing the cruise the video films are analyzed in more detail by IMR and NGU. The results are used to map the bottom types, biodiversity, and distribution of benthic communities as well as signs of damage to the seabed by fishing activities (such as trawl marks). Sampling using equipment other than video provides information on the seabed particle composition, the possible presence of contaminants, and on species that are related to certain environmental conditions and/or bottom types. 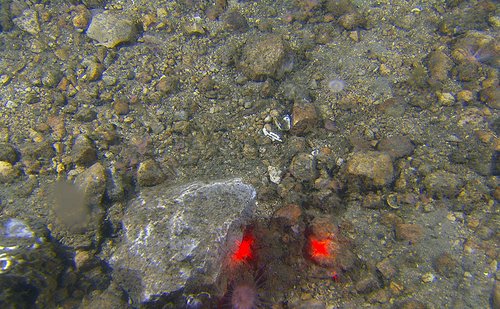 Already during the first two stations a large variation of the bottom types was observed. Along the first video line we observed much gravel, cobbles and boulders as well as muddy sediments. Top right of the image shows tentacles of a sea cucumber, and there are two sea anemones that have settled in this diverse and rocky bottom type. The red dots are the videorig's laser lights that help researchers to find the size of the observed organisms and bottom structures. There are 10 cm between each light point. 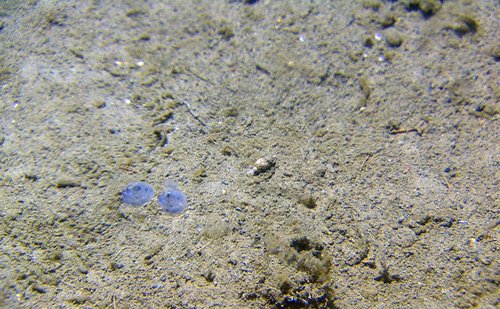 The second transect was generally a more fine-grained soft mud with small oases of gravel and stones. The soft, safe muddy bottom provides shelter for a lot of benthic species. The picture above shows two tunicates that survive by filtering food particles from seawater in a "sack" inside the body. Some bristle worms protrude just above the sediment surface, and we see a snail in the middle of the picture with his house on his back. 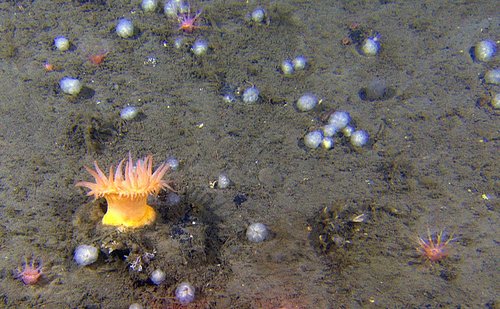 A great sea anemone sits proud on a stone in the cold waters of the Barents Sea. Here surrounded by colonial tunicates. We can also see the tentacles of a sea cucumber barely protruding from the sediments. All these groups of animals survive by capturing food particles from the bottom water that flows around them. The sea anemone captures animals/small fish that might be unlucky enough to get in touch with its tentacles. 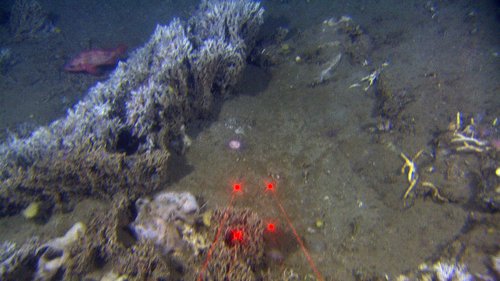 The Polychaete Filigrana forms structures that rise above the bottom sediments forming new substrate for other small animals on the sea floor.