The mapping service which is visualising the seabed has now been updated using shadow relief displays created from high-resolution seabed terrain models. The result is that more topographical details are visible in the map displays.

The bathymetric mapping of areas in the Barents Sea has now been updated with more detailed map images with a resolution of 5 metres. The areas in question are outside Norwegian territorial waters. Previously, only shadow relief images with a resolution of 25 metres have been available. The marine areas offshore Senja, Vesterålen and Lofoten will also be updated in the near future. The figure below illustrates the difference between terrain models with 5 and 25-metre resolution.

In shallow-water areas it is possible to create terrain models with a resolution of decimetres from modern depth data acquired using multi-beam echo-sounders installed on surface vessels, provided that the resolution and density of the data are high.

Despite having been acquired using multi-beam echo-sounders, some older bathymetric data from around the year 2000 unfortunately do not have the necessary high data density to create bathymetric models with a resolution of 5 metres. 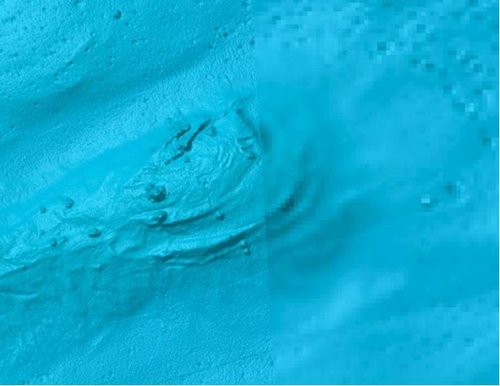 Shadow relief display of the seabed (a section of Tromsøflaket). The resolution on the left-hand side is 5 metres and on the right 25 metres. 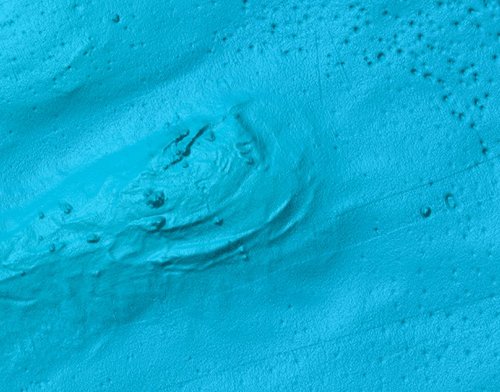 Shadow relief display of the seabed. The same section as in the Figure above, but with 5-metre resolution in the whole area.

Pockmarks (gas emission sites) and potential corals are clearly visible. Stripes aligned along the survey lines can also be seen. These are not real bathymetric features, but arise because data in neighbouring survey lines do not match perfectly. It would be preferable not to see survey lines in the data, but filtering these out during later processing would also remove important bathymetric details. Ideally, the acquired data should be so good that such false patterns do not exist, but the compromise is that the patterns are seen to be false but do not camouflage the real data.

The limit of resolution

To detect the details in the bathymetric model with 5-metre resolution, it is necessary to zoom in on the map image. When we look at a map of a large area, in other words at small scale (less than 1:500 000), a summary image with a resolution of 200 metres is shown. If we zoom in on the map, the resolution will automatically change to 50 metres, and then to 25 or 5 metres, where such data exist. The limits of the different resolutions at different map scales are:

It is possible to create bathymetric models at 5-metre resolution from modern depth data acquired with a multi-beam echo-sounder down to a certain depth, which depends on the equipment used for the acquisition. In some places it is possible to produce models with a resolution of 5 metres in water depths of up to 1700 metres.

The shadow relief map has also been updated using depth data sets which cover new areas (see the illustrations below): 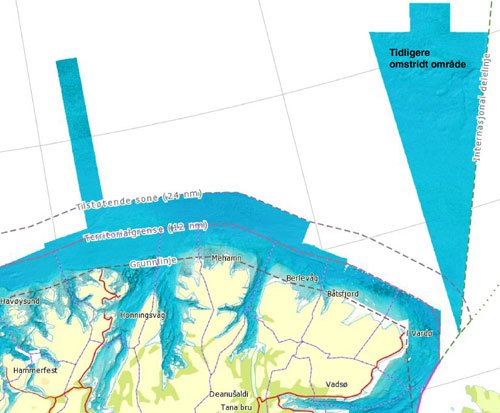 New data set in the southern part of the previously disputed area in the Barents Sea. 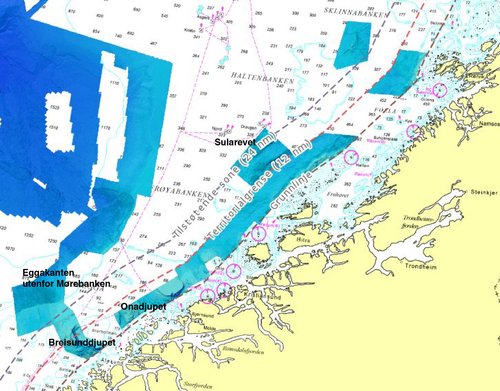