Cruise report: MAREANO's spring-cruise with R/V G.O. Sars has now been going on for about one week. The purpose of this first part of the cruise is to complete the mapping of habitats, benthic fauna and pollutants in the Nordland VI area off Lofoten, while in the second part video-filming will take place in the Storegga area and an area between Kristiansund and Halten.

The first part of the cruise covers the Nordland VI area, while later the area between Kristiansund and Halten is to be surveyed.

Unfortuneately we so far have lost two valuable days due to bad weather. When the waves grow too high, our sampling equipment do not function very well, and the work may be difficult to carry out on board. The main focus of this cruise is to take samples from the seabed by a grab, corers, beam trawl and epi-benthic sled since the previous expeditions largely carried out video filming of the seabed. This cruise also include a few samples using a so-called "gravity corer", which is a several meter long tube that is released with great force into the bottom ("gravitation driven"). The purpose is to calibrate the age analyses undertaken on samples collected from the short core that MAREANO ordinary relative to age analysis and measurements of any accumulation of pollutants deposited the last 100 years. 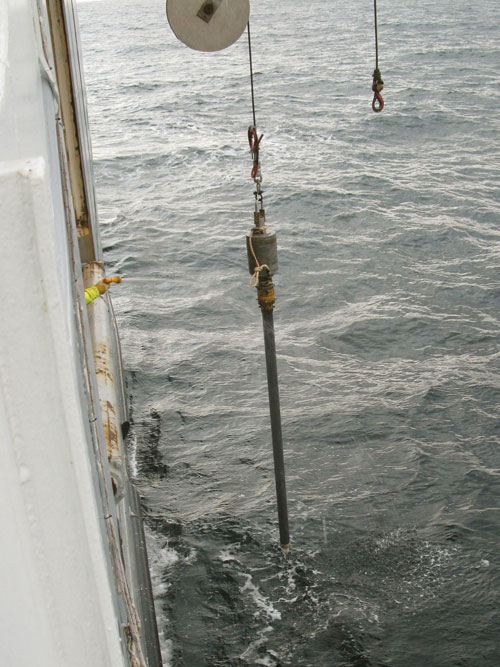 "Gravity corer" being launced from "R/V G.O. Sars" in order to collect samples from the bottom sediments.

Now we have collected samples from 16 localities, mainly at the continental slope and to depths of 2600 meters. The work will go faster the last part of the cruise as we will concentrate on shelf-locations at depths between 200 and 500 meters.