The first MAREANO cruise this year has been successfully finished after a one month survey off Vesterålen/Nordland VI and off North-Trøndelag and Møre. The last 2-3 days were used for video filming in the northern part of the Storegga where both depth and fauna communities varied. In deep water the communities were affected by sub-zero temperatures and a thousands of years old underwater slide.

The first MAREANO cruise this year has been successfully finished after a one month survey off Vesterålen/Nordland VI and off North-Trøndelag and Møre. The last 2-3 days were used for video filming in the northern part of the Storegga where both depth and fauna communities varied. In deep water the communities were affected by sub-zero temperatures and a thousands of years old underwater slide.

After 25 days at sea and a two-days return voyage to Tromsø, the research vessel "G.O. Sars" arrived Tromsø Tuesday May 22. In addition to the video filming of various faunal communities and unknown coral reefs off Trøndelag, we also made a visit to the picturesque village of Uthaug close to Ørlandet while waiting for better weather. A really nice place with white beaches and well-maintained older buildings.

After arriving to the Storegga May 19 we soon observed the contrast between the shallow bank area and the deep sea down the continental slope. While the shelf was diverse, and even with small sprigs of corals at the upper edge of the slope, the deep-water was (800-900 m) partly characterized by ridges of compact and hard sediments with fewer species.

Fauna that often thrive on hard stony bottom, such as sea lilies and the spectacular brittle star named Gorgon's head (see photos), was found in a number of dense populations of the obviously very compact and hard sediment parties. Thus, geological phenomena, in this case the massive undersea landslide that occurred thousands of years back in time at Storegga, affect the biological conditions by forming compact and hard "sediment waves" deep within the slide area.

As expected for the Norwegian Sea deep water, the temperature at these depths was measured to - 0.7 degrees, which is one of the reasons for the faunal differences between the deep water and shallow shelf areas. This picture shows how the strong bottom currents at 800 meters deep tears the brittle star Gorgon's head (Gorgonocephalus), a couple of sea lilies, and several colonies of cauliflower coral (Drifa). However, the award is that the strong currents bring a greater amount of organic particles to these animals that capture food particles drifting with the currents. The sea fan coral Paramuricea captures organic particles of the energy-rich waters, here at 350 meters depth on the shelf plain. It might be possible to see a few small crustaceans clinging to the top of coral bush. A strange pencil sea urchin with seemingly easily moving large spikes, often with small crustaceans as stowaways on the tip of the "pencils". This species, with the Latin name Cidaris cidaris, occurred quite frequently in the Storegga area. A dozen different hard-bottom species, with different colors, have been lucky enough to find their life's grip at a lonely stone-island. A small local 3-dimensional landscape formed by living animals. We see how the white, light mud-covered sponge creates a landscape in height and width where other organisms find a foothold. The many sea lilies exploit the sponges to get an easy access to the drifting organic food particles that are filtered out by means of their arms. 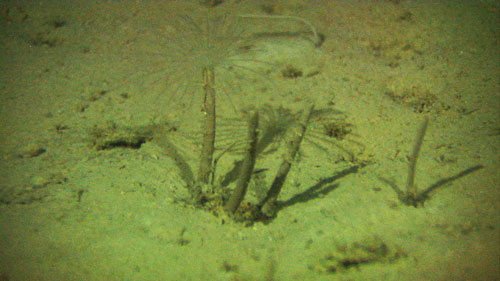 A few peacock worms spread their pretty filtering crone capturing food particles. These polychaetes live inside the pipes shown in the picture, forming cavities into the sediment where oxygen-rich water support a variety of oxygen-demanding organisms. The blackmouth catshark were quite often confronting the MAREANO camera lens, here at ca. 300 m depth at the Storegga shelf.

Finally, we like to thank those who have followed us through this voyage, whether it's through Facebook, cruise reports or newsletters. The next opportunity to follow us through the exciting MAREANO underwater survey is in the period from September 14 to October 7, when the shelf areas outside Nordland County and off the coast of Møre (the Mørebank) are to be surveyed.