In a Sea of Stars

I am a PhD student studying at the National Oceanography Centre in Southampton, UK. My work aboard the G.O. Sars is focusing on the Mud Star Ctenodiscus crispatus, which can be found throughout the muddy sediments of the Barents Sea.

These little stars are important as they burrow down into the mud, helping to oxygenate the sediment and stimulating microbial growth, which contributes to nutrient cycling and release. They also feed on the organic matter present within the mud, hence the name Mud Star.

To do this I kept the stars in little aquaria, partly filled with mud. To track their movement I used coloured particle tracers called ‘luminophores’, which I placed over the surface of the mud in a 2-3 mm layer. I then left the animals for 5 days to go about their business. 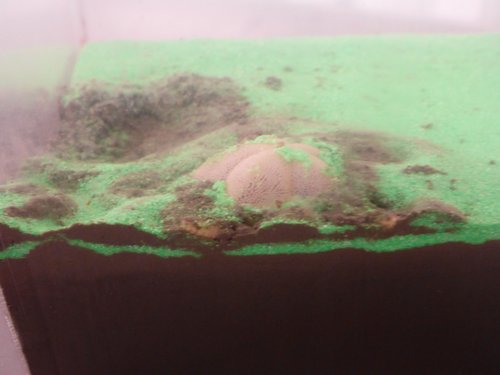 I then photographed the sediment under ultra-violet light. This makes the luminophore particles fluoresce. I can then easily identify them compared to the surrounding sediment using an automatic computer program. From this I can calculate the depth to which the mud stars mixed the luminophores particles into the sediment.

When I return to the UK I will also look at the reproduction and population genetics of the mud stars to see whether any differences are due to short term individual adaptation, or long term genetic variation.