MAREANO's 2016 field surveys in the Barents Sea and around Svalbard

MAREANO's 2016 campaign of hydrographic surveying began in February mapping the area between Bjørnøyrenna and Sørkapp, on Svalbard. Later this year bathymetric data acquisition will continue in the Barents Sea at the Norwegian side of the agreed Delimitation Line between Norway and Russia. Bathymetry data will also be acquired along the north coast of Svalbard, starting this year with surveys of the passage to Rijpfjorden. During 2016 there also will be two cruises for geological, biological and chemical sampling. The first cruise starts in June and will sample the new Norwegian area adjacent to the Norwegian/Russian Delimitation Line. The second cruise is bound for the area from Bjørnøyrenna to Kong Karls Land, to the southeast of Svalbard, and will be conducted in September – October.

In 2016 MAREANO takes a giant geographic leap in its mapping. The bathymetry of the Arctic waters north of Svalbard are to be surveyed, paving the way for further surveying in Rijpfjorden at Nordaustlandet in 2017. Rijpfjorden is probably among the high Arctic Norwegian fjords that is currently least affected by the recent climatic warming. MAREANO aims to document the current state of the fjord before further warming of the waters occurs on the northern coast of Nordaustlandet. Hydrographic surveying focused on finding a safe passage to Rijpfjorden, will begin in August 2016 by the NHS using MS Hydrograf, launching  the survey boats MB Lomvi and MB Havelle. 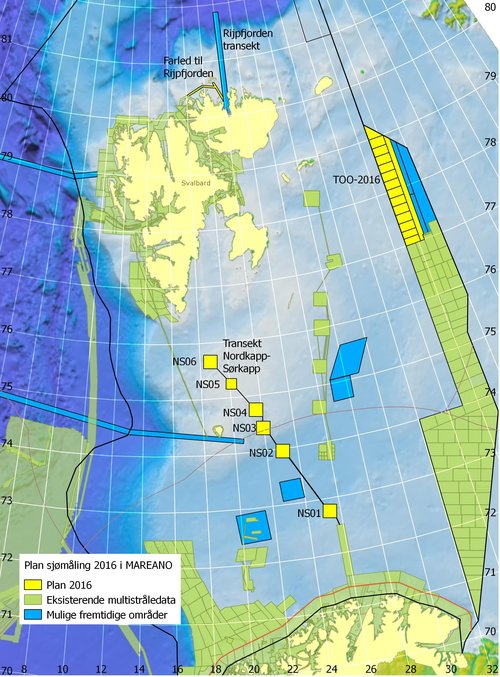 Since late February, bathymetric surveys have been conducted along a transect from Bjørnøyrenna in the Barents Sea and northwards towards Spitsbergen in Svalbard. Surveying in this area has been conducted using the Norwegian Defence Research Establishment’s research vessel MS H.U. Sverdrup II, and this was joined, in beginning of May by the survey vessel MSV Letto, owned by Meritaito. MAREANO's bathymetric data acquisition will continue later in the season in the new Norwegian area in the central Barents Sea.

MAREANO's bathymetry data are acquired using multibeam echosounders that, in addition to measuring bathymetry (yielding depth and terrain data), receive intensity signals from the seabed (backscatter), as well as water column data. The intensity of the backscatter signal gives valuable indications of the seabed composition (sand, mud, rock, etc.). One important use of this information is to allow MAREANO's scientists to plan which sites will subsequently be further investigated by geological, biological and chemical sampling.

The first geology, biology and chemistry cruise of 2016 will sail from Tromsø on June 9th with the research vessel Johan Hjort. This cruise is bound for the new Norwegian continental shelf area in the Barents Sea along the Russian/Norwegian Delimitation Line between where MAREANO left off in 2015. Here, MAREANO will continue sampling to the north, acquiring visual data and physical samples from about 60 localities before heading to Tromsø where the survey ends on June 22nd. 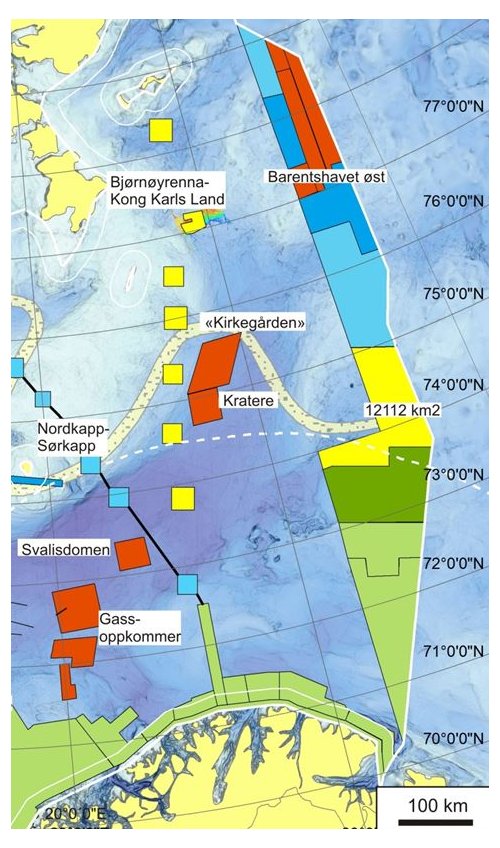 On September 13th the research vessel G.O. Sars will set sail for a 22 day expedition along a  transect from Bjørnøyrenna in the central Norwegian part of the Barents Sea, north to Kong Karls Land east of Spitsbergen. Visual data and physical samples from a total of 98 seafloor localities are to be collected within seven survey boxes (see figure), including a few sampling points between the boxes. In addition, four sites that were sampled several decades ago, will be re-sampled during this cruise to study environmental trends and potential impacts of recent climate change. We are very much looking forward to this survey, which is the first MAREANO geo-bio-chemistry cruise to acquire data across the polar front and within high-Arctic waters.